Choudhary Netram Bijarnia was a famous Jat philanthropist from Rajasthan. He was a big landlord & owned large parts of land in Jhunjhunu district of rajasthan. He founded the village ‘Netram ki Dhani’ near surajgarh which is now known as ‘Netrampura’. 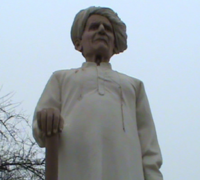 Choudhary Netram Bijarnia owned 9 hazar bighas (4000 acres) of land around the villages of Netrampura Jakhod, Bisanpura. Choudhary sahab donated most of this land to the landless farmers & poor people by rehabilitating them from other areas.

Choudhary Netram Bijarnia had a strong built. As an adult he was 6 feet 7 inches (2.01 m) tall, weighed 125 kilograms (275 lb) and had a chest measurement of 54 inches (137 cm). Due to his physique, even the british police & army officials feared him. As quoted by his son Choudhary Shyodan ram Bijarnia “Baba’s voice was so strong that his ‘Harrummph!-(coughing & clearing throat) can be heard for more than 5 kms. Villagers say that even the ‘Spirits’ feared him.

Choudhary Netram Bijarnia was a big hearten farmer & he constructed a big tube-well in the area & allowed all the people from nearby areas to use it free of cost. He also constructed a ‘Pyau’-free drinking water kiosk in Netram Ki Dhani & himself fed water to the passerby's.

His son Choudhary Shyodan ram (94 yrs) recounts that "Baba used to wake up at 4 am regularly & took bath with cold tube-well water till the age of 105 years”. He adds that “Baba never fell sick till the day he died & used to eat 10 bajra roti's with 1 liter ghee daily”.

Choudhary Netram Bijarnia contructed a big Haveli in the middle of Village ‘Netram ki dhani’ & used to feed 10-15 travelers/villagers daily with hookah and alcohol. He used to help everyone who came to him with food, home or money. Choudhary Netram was a ‘messiah’ for jat farmers in the jhunjhunu-shekhawati region.

Choudhary Saab was one of the prominent leaders of Shekawati farmers movement and worked extensively for the upliftment of the farmers in jhunjhunu.

Choudhary Netram Bijarnia was a pain in the ass for local english officials. He used to black liquor & other materials from punjab across ‘loharu’ on camels. He used to attack Britishers head on & used to stole their guns.

Choudhary Netram Bijarnia lived till the age of 105 . His statue was constructed in his village Netrampura & was inaugurated by Smt. Sumitra Singh (Speaker of the 12th Rajasthan Legislative Assembly).

Back to The Leaders/ The Freedom Fighters/Jat Jan Sewak