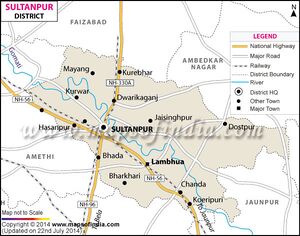 Sultanpur (सुलतानपुर) is a city and district Uttar Pradesh, India. The district is a part of Faizabad Division. Its ancient name was Kusapura or Kushapura (कुशपुर), which was one of the Buddhist places visited by Xuan Zang in 636 AD. The place was situated between Kausambi and Ayodhya. Alexander Cunningham has identified Kusapura with Sultanpur in Uttar Pradesh. [1]

Sultanpur City is Located on the right banks of the Gomti river (a major tributary of the Himalayan Ganga River). The principal river is the Gomti River, which passes through the centre of the district and serves a valuable highway for commerce. Minor streams are the Kandu, Pili, Tengha and Nandhia; their channels form the outlet for the superfluous water of the jhils, draining into the Sai.

According to Alexander Cunningham[2]Kusapura or Kusa-bhavana-pura, is said to have been named after Rama's son, Kusa. Shortly after the Muhammadan invasion it belonged to a Bhar Raja Nand Kunwar, who was expelled by Sultan Alauddin Ghori (read Khilji). The defences of the town were strengthened by the conqueror, who built a mosque and changed the name of the place to Sultanpur. The site of Kusapura was, no doubt, selected by its founder as a good military position on account of its being surrounded on three sides by the river Gomati or Gumti.

Lord Rama divided, during his lifetime, his vast kingdom among his brothers and sons. His son, Kusha succeeded to the south Kosala with its capital at Ayodhya. The old city of Sultanpur which lay on the right bank of the Gomti is said to have been called Kusapura or Kusabhavanpur, having been named after Kusa, who is locally believed to have founded it. The story of his marriage with a Naga princess testifies that he propagated Vedic culture among aborigines.

Afterwards the central power of Kosala became weak and Dirghayajna, the ruler of Ayodhya, was subdued by Bhima, one of five Pandavas in the Mahabharata War (Mahabharata, Sabhaparva).

A few generations later, in the period of king Para, Ayodhya was occupied by the king Divakara of Sravasti branch, founded by Rama's second son, Lava. The District then began to be ruled over by the Kosala kings from their capital at Sravasti. The tract of river Gomti around the village Dhopap (pargana Chanda, tehsil Kadipur) is described as Dhutpap in Visnu Puran. The original town was situated on the left bank of the Gomti. It is said to have been founded by Kusa, son of Rama, and to have been named after him Kusapura or Kusabhavanpur.

This ancient city has been identified by Alexander Cunningham with the Kusapur mentioned by Hiuentsang, the Chinese traveller. He states that there was in his time a dilapidated stupa of Ashoka and that Buddha taught here for six months.

There are Buddhist remains still visible at Mahmoodpur, a village, 8 km distant to the north-west of Sultanpur. The town subsequently fell into the hands of Bhars, who retained it until it was taken from them by Musalmans in the 12th century.

About seven hundred and fifty years ago, it is said, two brothers, Sayid Muhammad and Sayid Ala-ud-Din, horse dealer by profession, visited eastern Avadh and offered some horses for sale to Bhar Chieftains of Kusabhavanpur, who seized the horses and put the two brothers to death. This came to the ear of Ala-ud-Din Khilji, who would not allow such an outrage to pass unpunished. Gathering a mighty force, therefore, he set out for Kusabhavanpur and took revenge by killing most of the Bhars by strategem adopted after a long drawn siege. Kusabhavanpur was reduced to ashes and the town of Sultanpur, so called from the rank of the victor, rose upon its ruins. This town was finally raised to the ground during the military operations connected with the reoccupation of the province in consequence of the inhabitants having been concerned in the murder of British officers at the outbreak of the freedom struggle of 1857.

Long a center of Hindu and Buddhist culture Sultanpur fell under Muslim occupation in the 12th century. The town was completely destroyed during the military operations of the Revolt of 1857.

Around the 14-15th century, Rajkunwar branch of Chauhan Dynasty claiming to be direct descendent of Hammir Dev Chauhan of Ranthambore along with other clans like Bandalgotis, Rajwars and Bachgotis ruled over a large part of the district.

Visit by Xuanzang in 636 AD

Alexander Cunningham[3] writes that From Kosambi the Chinese pilgrim travelled to the north-east, through a vast forest as far as the Ganges, after crossing which his route lay to the north for a distance of 700 li, or 117 miles, to the town of Kia-she-pu-lo, which M. Julien correctly renders by Kasapura.[4] In searching for the site of this place, the subsequent route of the pilgrim to Visakha, a distance of 170 to 180 li, or from 28 to 30 miles, to the north is of equal importance with the bearing and distance from Kosambi. For as the Visakha of Hwen Thsang, as I will presently show, is the same place as the Sha-chi of Fa-Hian, and the Saketa or Ayodhya of the Hindus, we thus obtain two such well-fixed points as Kosambi and Ayodhya to guide us in our search. A single glance at the map will be sufficient to show that the old town of Sultanpur on the Gomati (or Gumti) river is as nearly as possible in the position indicated. Now the Hindu name of this town was Kusabhavanapura, or simply Kusapura, which is almost the same name as that of Hwen Thsang. Remembering Mr. Bayley's note of information derived from Raja Man Singh that there was "a tope near Sultanpur," I

[p.399]: pitched my tent on one side of the now utterly desolate city, and searched the whole place through most carefully, but all in vain : I could neither find the trace of any tope, nor could I even hear of ancient remains of any kind. On the following day, however, after I had left Sultanpur, I heard that the village of Mahmudpur, about 5 miles to the north-west, was situated on an ancient mound of somewhat larger size than that of Sultanpur, and on my arrival at Faizabad, I learned from Lieutenant Swetenham, of the Royal Engineers, that there is an old tope to the north-west of Sultanpur, not far from this village.

I conclude, therefore, that Sultanpur, the ancient Kusapura, is the same place as the Kasapura of Hwen Thsang, and this identification will be made even more certain on examination of the recorded distances.

On leaving Kosambi, the pilgrim proceeded first in a north-east direction to the Ganges, after crossing which he turned to the north to Kasapura, the whole distance being 117 miles. Now, the two great ghats on the Ganges to the north-east of Kosam are at Mau-Saraya and Papa-mau, the former being 40 miles, and the latter 43 miles distant. But as these two ghats are close together, and almost immediately to the north of Allahabad, the total distance to Kasapura will be the same whichever place of crossing be taken.

From Papamau to Sultanpur the direction is due north, and the distance 66 miles ; the whole line from Kosam to Sultanpur being 109 miles, which is within 8 miles of the round number of 700 li, or 116-2/3 miles, as given by Hwen Thsang; while both of the bearings are in exact accordance with his statements. From Kasapura to Visakha the direction followed by the pil-

Now the present city of Ajudhya, the ancient Ayodhya or Saketa, is almost due north from Sultanpur, the distance being 30 miles to the nearest point, or just six miles in excess of the distance given by Hwen Thsang. As the former of these distances is in default, while the latter is in excess, I would suggest, as a possible alternative, that our measurements should be taken from the village of Mahmudpur, which would make the route from Kosam to the Buddhist establishment near Kasapura up to 114 miles, or within three miles of the number stated by Hwen Thsang, and lessen the subsequent route to Ayodhya from 36 to 31 miles, which is within one mile of the number given by the Chinese pilgrim. As all the bearings are in perfect accordance, and as the names of the two places agree almost exactly, I think that there can be little hesitation in accepting the identification of Sultanpur or Kusapura with the Kasapura of Hwen Thsang.

Kusapura or Kusa-bhavana-pura, is said to have been named after Rama's son, Kusa. Shortly after the Muhammadan invasion it belonged to a Bhar Raja Nand Kunwar, who was expelled by Sultan Alauddin Ghori (read Khilji). The defences of the town were strengthened by the conqueror, who built a mosque and changed the name of the place to Sultanpur. The site of Kusapura was, no doubt, selected by its founder as a good military position on account of its being surrounded on three sides by the river Gomati or Gumti. The place is at present utterly desolate ; the whole population having been removed to the new civil station on the opposite or south bank of

the river. The ruined fort of Sultanpur now forms a large mound, 750 feet square, with brick towers at the four corners. On all sides it is surrounded by the huts of the ruined town, the whole together covering a space of about half a mile square, or about two miles in circuit. This estimate of the size of Sultanpur agrees very closely with that of Kusapura given by Hwen Thsang, who describes the place as being 10 li, or 1-2/3 miles, in circuit.

Eighteen miles to the south-east of Sultanpur, or Kusapura, there is a celebrated place of Hindu pilgrimage called Dhopapapura. It is situated on the right or west bank of the Gomati river, and immediately under the walls of Garha, or Shir-ke garhi. The site of Dhopap is evidently one of considerable antiquity, as the fields for half a mile all round are covered with broken bricks and pottery.