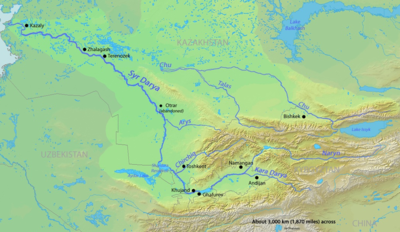 Bishkek formerly Pishpek and Frunze, is the capital and the largest city of Kyrgyzstan.

The name is thought to have been derived from a Kyrgyz word for a churn used to make fermented mare's milk (kumis), the Kyrgyz national drink.

Originally a caravan rest stop (possibly founded by the Sogdians) on one of the branches of the Silk Road through the Tian Shan range, the location was fortified in 1825 by the Uzbek khan of Kokhand with a mud fort, then, in 1862, named as the Russian fortress Pishpek in 1926 the city was renamed Frunze, after the Bolshevik military leader Mikhail Frunze. In 1991, the Kyrgyz parliament restored the city's historical name.

Bishkek is situated at about 800 metres (2,600 ft) altitude just off the northern fringe of the Kyrgyz Ala-Too range, an extension of the Tian Shan mountain range. North of the city, a fertile and gently undulating steppe extends far north into neighboring Kazakhstan. The Chui River drains most of the area. Bishkek is connected to the Turkestan-Siberia Railway by a spur line.