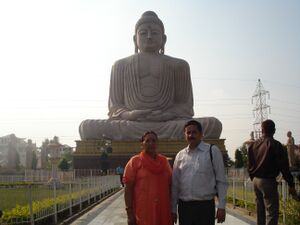 The Great Buddha Statue at Bodhgaya

Siddhartha Gautama (सिद्धार्थ गौतम), popularly known as Buddha, was the founder of the Buddhism. He is regarded as the Supreme Buddha. The word 'Buddha' means one who is awakened or enlightened. The time of his birth and death are uncertain: but most of the early 20th-century historians dated his lifetime as c. 563 BCE to 483 BCE. 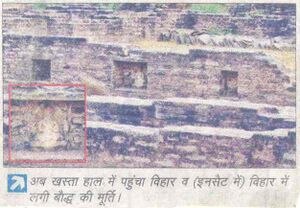 Gautama Buddha is thought to have been born in Lumbini and raised in the small kingdom of Kapilvastu, both of which are in modern day Nepal. Buddha's father was King Suddhodana, the leader of Shakya clan, whose capital was Kapilavastu, and who were later annexed by the growing Kingdom of Kosala during the Buddha's lifetime; Gautama was the family name. His mother, Queen Maha Maya (Māyādevī) and Suddhodana's wife, was a Koliyan princess. As was the Shakya tradition, when his mother Queen Maya became pregnant, she left Kapilvastu for her father's kingdom to give birth. However, her son is said to have been born on the way, at Lumbini, in a garden beneath a sal tree.

During the birth celebrations, the hermit seer Asita journeyed from his mountain abode and announced that the child would either become a great king (chakravartin) or a great holy man.

While later tradition and legend characterized Śuddhodana as a hereditary monarch, the descendant of the Solar Dynasty of Ikṣvāku (Pāli: Okkāka), many scholars think that Śuddhodana was the elected chief of a tribal confederacy.

Siddhartha was brought up by his mother's younger sister, Maha Pajapati. When he reached the age of 16, his father reputedly arranged his marriage to a cousin of the same age named Yaśodharā. According to the traditional account, she gave birth to a son, named Rahula. Siddhartha is then said to have spent 29 years as a prince in Kapilavastu.

At the age of 29, the popular biography continues, Siddhartha left his palace to meet his subjects. Despite his father's efforts to hide from him the sick, aged and suffering, Siddhartha was said to have seen an old man. When his charioteer Channa explained to him that all people grew old, the prince went on further trips beyond the palace. On these he encountered a diseased man, a decaying corpse, and an ascetic. These depressed him, and he initially strived to overcome ageing, sickness, and death by living the life of an ascetic.

Accompanied by Channa and aboard his horse Kanthaka, Gautama quit his palace for the life of a mendicant. It's said that, "the horse's hooves were muffled by the gods" to prevent guards from knowing of the new bodhisattva's departure. This event is traditionally known as "the great departure".

Gautama initially went to Rajagaha and began his ascetic life by begging for alms in the street. Having been recognised by the men of King Bimbisara, Bimbisara offered him the throne after hearing of Siddhartha's quest. Siddhartha rejected the offer, but promised to visit his kingdom of Magadha first, upon attaining enlightenment.

He left Rajagaha and practised under two hermit teachers. After mastering the teachings of Alara Kalama (Skr. Ārāḍa Kālāma), he was asked by Kalama to succeed him. However, Gautama felt unsatisfied by the practise, and moved on to become a student of Udaka Ramaputta (Skr. Udraka Rāmaputra). With him he achieved high levels of meditative consciousness, and was again asked to succeed his teacher. But, once more, he was not satisfied, and again moved on.

Siddhartha and a group of five companions led by Kaundinya are then said to have set out to take their austerities even further. They tried to find enlightenment through deprivation of worldly goods, including food, practising self-mortification. After nearly starving himself to death by restricting his food intake to around a leaf or nut per day, he collapsed in a river while bathing and almost drowned.Siddhartha began to reconsider his path. Then, he remembered a moment in childhood in which he had been watching his father start the season's plowing. He attained a concentrated and focused state that was blissful and refreshing, the jhāna.

According to the early Buddhist texts, after realizing that meditative jhana was the right path to awakening, but that extreme asceticism didn't work, Gautama discovered what Buddhists call the Middle Way—a path of moderation away from the extremes of self-indulgence and self-mortification. In a famous incident, after becoming starved and weakened, he is said to have accepted milk and rice pudding from a village girl named Sujata. Such was his emaciated appearance that she wrongly believed him to be a spirit that had granted her a wish.

Following this incident, Gautama was famously seated under a pipal tree - now known as the Bodhi tree - in Bodh Gaya, India, when he vowed never to arise until he had found the truth. Kaundinya and four other companions, believing that he had abandoned his search and become undisciplined, left. After a reputed 49 days of meditation, at the age of 35, he is said to have attained Enlightenment.

According to Buddhism, at the time of his awakening he realized complete insight into the cause of suffering, and the steps necessary to eliminate it. These discoveries became known as the "Four Noble Truths" which are at the heart of Buddhist teaching.

Back to Buddhism/Jats in Buddhism