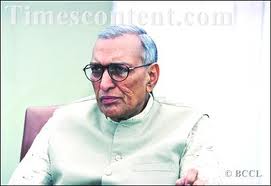 Chaudhary Bansi Lal (1927 – 2006) was a freedom fighter, senior Congress leader, former Chief Minister and the architect of Haryana. He was born on August 26, 1927 in Golagarh village in the family of Chaudhari Mohar Singh of Legha Jats, in Bhiwani district of Haryana, India.

Bansi Lal studied at the Punjab University Law College, Jalandhar. In 1972, the Kurukshetra University and the Haryana Agriculture University, Hisar conferred on him honorary degrees of Doctor of Law and Doctor of Science respectively. 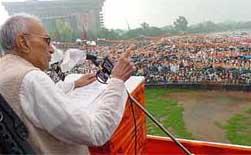 He was responsible for electrifying all villages in Haryana during his tenure as chief minister in the late sixties and seventies. He was also the pioneer of highway tourism in the state - a model later adopted by a number of states. In the Nineties, he also banned liquor sales in Haryana though this policy could not last long, due to close proximity of Delhi, Uttar Pradesh, Rajasthan and Punjab from where liquor was being smuggled in large quantity and it became difficult for the police to control the entire borders of the state. His son Surender Singh and his associates are said to be behind the failure of prohibition and hence Bansi Lal Government.

Bansi Lal did not contest the assembly elections in 2005 but his sons Surendra Singh and Ranbir Singh Mahendra were elected to the state assembly. Surendra Singh died in a helicopter crash near Saharanpur in Uttar Pradesh in 2005.

Bansi Lal was in the limelight when Emergency was imposed by the then Prime Minister Indira Gandhi on 26th June,1975. He was a confidante of Indira Gandhi and her son Sanjay during the controversial Emergency days in 1975. He along with Sanjay Gandhi was said to be responsible for various steps during the Emergency, including a plan to cut off power supply to newspaper establishments and close down courts. He was the defence minister from December 21, 1975 to March 24, 1977 and a minister without portfolio in the Union government from December 1, 1975 to December 20, 1975.

This bio data has been copied from the website of Rajya Sabha - http://rajyasabha.nic.in/rsnew/pre_member/1952_2003/b.pdf

Bansi Lal died in New Delhi on 28 March 2006. He had been unwell for quite some time.