It was reputed as one of the greatest cities of its age, but was destroyed by Ögedei Khan, son of Genghis Khan, in the early 1220s and lost to history. It has been proposed that the magnificent Minaret of Jam, in Shahrak District, Ghor Province, is the only standing remains of the city. It is also believed that the ancient city was the home of a Jewish trading community, documented by inscriptions on tombstones found in the 1950s. The scholar Walter Fischel published an article reviewing the finds and establishing the connections of the Firozkoh community with other Jewish communities in early Medieval Afghanistan.

The Minaret of Jam 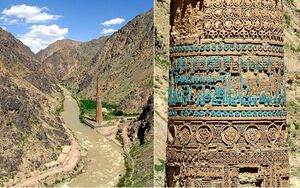 The Minaret of Jam in Afghanistan

The Minaret of Jam is a 12th century tower located where the Hari River meets the River Jam in the Sharhrak district of Afghanistan. Standing 65 meters above the valley, it is the only surviving monument of the 12th century Ghurid Empire, Afghanistan’s last great indigenous empire, now known as the Lost City of Turquoise Mountain. It remains as a lasting legacy of a period in which Jews, Christians, and Muslims lived side-by-side in harmony, united by their commonalities rather than divided by their differences.

The Turquoise Mountain (Firozkoh) is the legendary lost Afghan capital of the Middle Ages. Reputedly a prospering multicultural centre and one of the greatest cities of its age, it is also believed the ancient city was the home of a Jewish trading community, documented by inscriptions on tombstones found in the 1950s. Ögedei Khan, son of Genghis Khan, destroyed the capital in the early 1220s, marking its loss to history.

The Minaret of Jam rests on an octagonal base and consists of four cylindrical shafts resting on top of one another, and getting progressively smaller as they get higher. It is made of fired brick and lime mortar, with two wooden balconies and a lantern at the top. Its exterior is decorated in exquisite detail, covered with brick, stucco, and glazed tiles, which contain intricate inscriptions of alternating bands of kufic and naskhi calligraphy, geometric patterns, and verses from the Qur'an.[1]