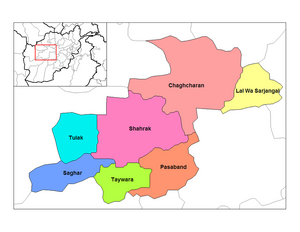 It is located in central Afghanistan, towards the north-west. The capital of Ghor is Chaghcharan.

Remains of the oldest settlements discovered by Lithuanian archaeologists in 2007 and 2008 in Ghor date back to 5000 BC.[1] Ruins of a few castles and other defense fortifications were also discovered in the environs of Chaghcharan. A Buddhist monastery hand-carved in the bluff of the river Harirud existed in the first centuries during the prevalence of Buddhism. The artificial caves revealed testimony of daily life of the Buddhist monks.[2] The region remained primarily Pagan, Zoroastrian and Buddhist till 12th century. It was then Islamised and gave rise to the Ghurids.