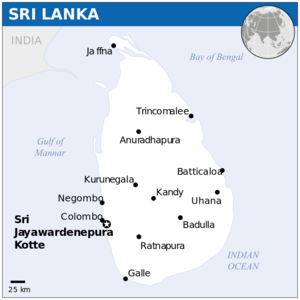 Mahatirtha (महतीर्थ) was the place of landing of people of Pandya kingdom who came from Madura to Sri Lanka on the invitation Prince Vijaya. It was located near Mannar Island overlooking the Gulf of Mannar. Mannar was called Mahatittha in Mahavansa.

Manthai (Tamil: மாந்தை, romanized: Māntai) is a coastal town and an ancient harbor situated in the Mannar district, of the Northern Province of Sri Lanka. Manthai functioned as the main port of the Anuradhapura Kingdom throughout its history.

Historically known as Manthottam in Tamil and Manthota or Mahathiththa in Sinhalese, it is an important religious site in the island.

Manthai the present day name given by the locals for the town, is possibly a derivation from the ancient Tamil name Manthottam which may translate into Garden of the Deers.

The place was also known as Rajarajapuram when the northern part of Sri Lanka was ruled by Raja Raja Chola I in the 10th century AD as mentioned in an inscription of the Cholas found in Manthai.[1]

Buried city: The term Manthottam is mentioned in many ancient Tamil epics. Perera, B.J. mentions that “Although Mahathitha (Mathoddam) is first mentioned in connection with the landing of Vijaya’s second wife, a royal princess from the Pandyan Kingdom, there is no doubt that it was used as port by the Tamils long before the Aryan settlement in Ceylon. The existence of the Temple Tiruketheeswaram, the origin of which is not covered by existing records, is an indication of the antiquity of the port. Indeed Mahathitta is the only port in the Island which can be called a buried city. Mahathittha was a great port in the early centuries of the common era. Next we have the references in the Sangam literature of the Tamils describing Mahathitta as a great port.” Sinhalese epics refer to both the town as well as the town of Mannar by the term Mahathittha.

Mathoddam is currently viewed as the only port on the island that could be called a "buried city," with much of the ancient ruins under sand today. The existence of the Thiruketheeswaram temple attests to the antiquity of the port. Manthoddam finds mention as "one of the greatest ports" on the seaboard between the island and Tamilakam in the Tamil Sangam literature of the classical period (600 BCE - 300 CE).

Mahavansa/Chapter 7 ....When he had thus obtained many maidens and had given compensation to their families, he sent his daughter, bedecked with all her ornaments, and all that was needful for the journey, and all the maidens whom he had fitted out, according to their rank, elephants withal and horses and wagons, worthy of a king, and craftsmen and a thousand families of the eighteen guilds, entrusted with a letter to the conqueror Vijaya. All this multitude of men disembarked at Mahatittha; for that very reason is that landing-place known as Mahatittha.