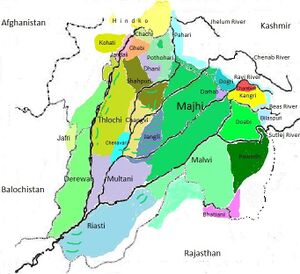 Majha (माझा) is a region located in the central parts of the historical Punjab region split between India and Pakistan.[1] People of the Majha region are given the demonym "Mājhī". Most inhabitants of the region speak the Majhi dialect.

It extends north from the right banks of the river Beas, and reaches as far north as the river Jhelum.[2]

This region contains thirteen districts of the Pakistani province of Punjab, including the cities of Lahore, Faisalabad, Gujranwala, Gujrat, and Sialkot. Four districts of Indian state of Punjab – Amritsar, Tarn Taran, Gurdaspur, and Pathankot.

The word "Mājhā" means the "central" or the "heartland". The Majha region is geographically located in the middle (or central part) of the historic Punjab region, hence giving it the name Majha.[4]

Back to Jat Regions