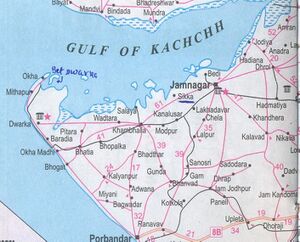 Mithapur (मीठापुर) is a village in - Tahsil in Jamnagar District in Gujarat.

Mithapur is located on the extreme tip of the lower jaw of Gujarat.

This town is essentially a colony that is supported by Tata Chemicals Ltd., one of the flagship companies of the Tata Group. In addition to that, Tata Business Support Services has established a call center in the town.

The Mithapur story began in 1939, when the Tatas took over the Okha Salt Works. Okhamandal, the region where Mithapur is situated, was an undeveloped and desolate place where many kingdoms and civilisations had thrived in the past. 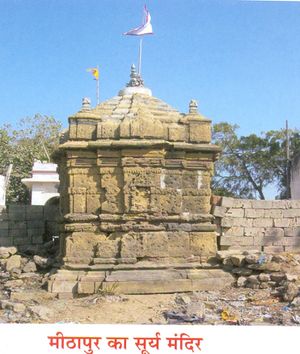 Mithapur, privately owned by Tata Chemicals, is part of the 5,398-acres of freehold land obtained in the 1930s from the government of the erstwhile princely state of Baroda.