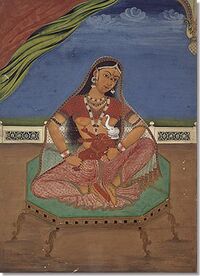 Pārvatī (पार्वती), sometimes spelled Parvathi or Parvathy, is a Hindu goddess. She is especially worshipped by married women to seek the health and longevity of their husbands. Also, those who pray to Parvati may be asking for help to overcome obstacles in life.

In many interpretations of the scriptures, Parvati is also regarded as a representation of Shakti or Durga, albeit the gentle aspect of that goddess. Parvati's other names include Uma, Lalitha, Gowri, Shivakamini, Aparna, the maternal epithet Mataji, and many hundreds of others; the Lalita sahasranama contains an authoritative listing.

Parvati is also known by other names - Uma (उमा) and Gauri (गौरी) are the most famous ones.

Uma (उमा) is a term mentioned by Panini in Ashtadhyayi. [1]

Parvatiya sangba (पार्वतीय संघ) is mentioned by Panini in Ashtadhyayi. [3]

Shakti (शक्ति) is mentioned by Panini in Ashtadhyayi. [4]

Parvata is one of the Sanskrit words for "mountain"; "Parvati" translates to "She of the mountains" and refers to Parvati being born the daughter of Himavan, lord of the mountains. Parvati's parents are Himavat, the personification of the Himalaya mountains, and the apsaras Menā.

Parvati is nominally the second consort of Shiva. Ganesha and Kartikeya were sons of Shiva and Parvati.