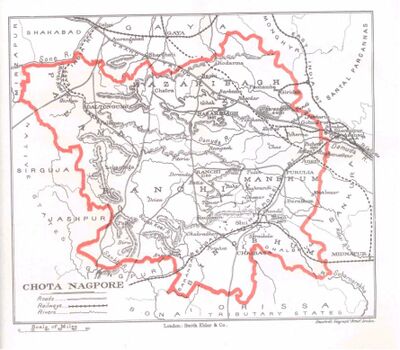 Location of Ranchi in Chhota Nagpur

Ranchi (रांची) is the capital city of the Indian state of Jharkhand. The Jharkhand state was formed on 15 November 2000 by carving out the Bihar divisions of Chhota Nagpur and Santhal Parganas.

Ranchi lies at 23°22′N 85°20′E. Ranchi is located in the southern part of the Chhota Nagpur Plateau, which is the eastern section of the Deccan plateau.

The geographical area currently comprising the district of Ranchi was ruled by the Kshatriya rulers named Phanimukuta and was in the direct control of the kings of the epic period of the Mahabharata such as Jarasandha, the king of Rajgir. However Lord Krishna was believed to have a loose control over the territory.

Magadha Empire exercised indirect control over the territory, which lasted until the reign of the Ashoka. Kalinga rulers are believed to have ravaged the region during their expeditions to Rajgir and Pataliputra. Armies of Samudra Gupta passed through the region on their expedition to Deccan. After the decline of the Guptas, Phanimukut established the Kingdom of Chhotanagpur. The legendary Phanimukut, which literally means the crown of the cobra, was found by the side of a cobra (Nag in Hindi), and grew to be an industrious king, and founded the Naga Dynasty, which ruled Ranchi district and a larger part of Chhota Nagpur Plateau as a sovereign king for almost next 1000 years.

With the expansion of the Mughal Empire, the sovereign status of the Nag Dynasty was technically affected, but they continued to rule and administer independently until the advent of the East India Company. During the period of the British Raj, adivasis and the local population of other ethnic backgrounds of Ranchi and other regions currently comprising the State of Jharkhand continued to oppose the subjugation by the British, and the region witnessed a number of uprisings and revolts.

Presently, Ranchi district is divided into 2 sub-divisions and 14 administrative blocks. On September 12, 2007, Khunti district was created by carving Khunti subdivision and its 6 blocks out of Ranchi district.