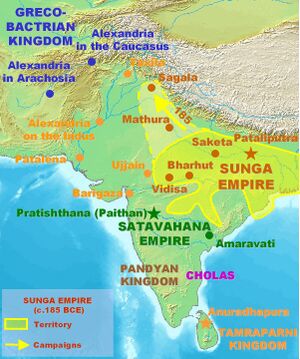 Shunga (शुंग) (187-78 BCE) was an ancient Indian dynasty from Magadha that controlled areas of the central and eastern Indian subcontinent from around 187 to 78 BCE. The Shunga dynasty was established by Pushyamitra Shunga, after the fall of the Maurya Empire. Its capital was Pataliputra, but later emperors such as Bhagabhadra also held court at Besnagar (modern Vidisha) in eastern Malwa.[1]

The Shunga dynasty was a Brahmin dynasty,[2] established in 185 BCE, about 50 years after Ashoka's death, when the emperor Brihadratha Maurya, the last ruler of the Maurya Empire, was assassinated by his Senānī or commander-in-chief, Pushyamitra Shunga,[3] while he was reviewing the Guard of Honour of his forces. Pushyamitra Shunga then ascended the throne.[4]

Pushyamitra Shunga ruled for 36 years and was succeeded by his son Agnimitra. There were ten Shunga rulers. However, after the death of Agnimitra, the second king of the dynasty, the empire rapidly disintegrated:[5] inscriptions and coins indicate that much of northern and central India consisted of small kingdoms and city-states that were independent of any Shunga hegemony.[6]

The dynasty is noted for its numerous wars with both foreign and indigenous powers. They fought the Kalinga, the Satavahana dynasty, the Indo-Greek Kingdom and possibly the Panchalas and Mitras of Mathura.

Art, education, philosophy, and other forms of learning flowered during this period including small terracotta images, larger stone sculptures, and architectural monuments such as the stupa at Bharhut, and the renowned Great Stupa at Sanchi. Shunga rulers helped to establish the tradition of royal sponsorship of learning and art. The script used by the empire was a variant of Brahmi script and was used to write Sanskrit.

The Shunga Empire played an imperative role in patronizing culture at a time when some of the most important developments in Hindu thought were taking place. Patanjali's Mahābhāṣya was composed in this period. Artistry also progressed with the rise of the Mathura art style.

Pushyamitra Shunga became the ruler of Magadha and neighbouring territories. His realm essentially covered the central parts of the old Mauryan Empire. The Shunga definitely had control of the central city of Ayodhya in northern central India, as is proved by the Dhanadeva-Ayodhya inscription.[7]

However, the city of Mathura further west never seems to have been under the direct control of the Shungas, as no archaeological evidence of a Shunga presence has ever been found in Mathura. On the contrary, according to the Yavanarajya inscription, Mathura was probably under the control of Indo-Greeks from some time between 180 BCE and 100 BCE, and remained so as late as 70 BCE.[8]

Some ancient sources however claim a greater extent for the Shunga Empire: the Asokavadana account of the Divyavadana claims that the Shungas sent an army to persecute Buddhist monks as far as Sakala (Sialkot) in the Punjab region in the northwest: ... Pushyamitra equipped a fourfold army, and intending to destroy the Buddhist religion, he went to the Kukkutarama (in Pataliputra). ... Pushyamitra therefore destroyed the sangharama, killed the monks there, and departed. ... After some time, he arrived in Sakala, and proclaimed that he would give a ... reward to whoever brought him the head of a Buddhist monk.[9]

Also, the Malavikagnimitra claims that the empire of Pushyamitra extended to the Narmada River in the south. They may also have controlled the city of Ujjain.[10] Meanwhile, Kabul and much of the Punjab passed into the hands of the Indo-Greeks and the Deccan Plateau to the Satavahana dynasty.

Pushyamitra died after ruling for 36 years (187–151 BCE). He was succeeded by son Agnimitra. This prince is the hero of a famous drama by one of India's greatest playwrights, Kālidāsa. Agnimitra was viceroy of Vidisha when the story takes place.

The power of the Shungas gradually weakened. It is said that there were ten Shunga emperors. The Shungas were succeeded by the Kanva dynasty around 73 BCE.

The Greeks seem to have maintained control of Mathura. The Yavanarajya inscription, also called the "Maghera inscription", discovered in Mathura, suggests that the Indo-Greeks were in control of Mathura during the 1st century BCE.[13][14] The inscription is important in that it mentions the date of its dedication as "The last day of year 116 of Yavana hegemony (Yavanarajya)". It is considered that this inscription is attesting the control of the Indo-Greeks in the 2nd and 1st centuries BCE in Mathura, a fact that is also confirmed by numismatic and literary evidence. Moreover, it doesn't seem that the Shungas ever ruled in Mathura or Surasena since no Shunga coins or inscriptions have been found there.[15]

The Anushasana Parva of the Mahabharata affirms that the city of Mathura was under the joint control of the Yavanas and the Kambojas.[16]

Later however, it seems the city of Mathura was retaken from them, if not by the Shungas themselves, then probably by other indigenous rulers such as the Datta dynasty or the Mitra dynasty, or more probably by the Indo-Scythian Northern Satraps under Rajuvula. In the region of Mathura, the Arjunayanas and Yaudheyas mention military victories on their coins ("Victory of the Arjunayanas", "Victory of the Yaudheyas"), and during the 1st century BCE, the Trigartas, Audumbaras and finally the Kunindas also started to mint their own coins, thus affirming independence from the Indo-Greeks, although the style of their coins was often derived from that of the Indo-Greeks.

Heliodorus pillar: The Heliodorus pillar was built in Vidisha under the Shungas, at the instigation of Heliodorus, ambassador of the Indo-Greek king Antialcidas. The pillar originally supported a statue of Garuda. Established circa 100 BCE.

Very little can be said with great certainty. However, what does appear clear is that the two realms appeared to have established normalized diplomatic relations in the succeeding reigns of their respective rulers. The Indo-Greeks and the Shungas seem to have reconciled and exchanged diplomatic missions around 110 BCE, as indicated by the Heliodorus pillar, which records the dispatch of a Greek ambassador named Heliodorus, from the court of the Indo-Greek king Antialcidas, to the court of the Shunga emperor Bhagabhadra at the site of Vidisha in central India.

Persecution of Buddhists and resurgence of Brahmanism

Following the Mauryans, the first Brahmin emperor was Pushyamitra Shunga, and is believed by some historians to have persecuted Buddhists and contributed to a resurgence of Brahmanism that forced Buddhism outwards to Kashmir, Gandhara and Bactria.[10] Buddhist scripture such as the Asokavadana account of the Divyavadana and ancient Tibetan historian Taranatha have written about persecution of Buddhists. Pushyamitra is said to have burned down Buddhist monasteries, destroyed stupas, massacred Buddhist monks and put rewards on their heads, but some consider these stories as probable exaggerations.[17][18]

The last of the Shunga emperors was Devabhuti (83–73 BCE). He was assassinated by his minister (Vasudeva Kanva) and is said to have been overfond of the company of women. The Shunga dynasty was then replaced by the subsequent Kanvas. The Kanva dynasty succeeded the Shungas around 73 BCE. The last king of Shunga dynasty was overthrown by Vasudeva Kanva, who then established Kanva dynasty.[19]