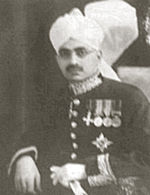 Sir Sikandar Hayat Khan (Hindi:सर सिकंदर हयात खां) (5 June 1892 in Multan – 25/26 December 1942) was a renowned politician and statesman from the Punjab. He was from Chima Muslim Jat Clan.

He was the son of late Nawab Muhammad Hyat Khan CSI, of Wah, who was a close associate of Sir Syed Ahmed Khan, and a prominent scion of the Khattar Jatt tribe of Attock, North Punjab. He was educated at School in Aligarh and later at Aligarh Muslim University, and for a short while was sent to England for higher education but was recalled home by his family (circa 1915).

During the First World War, he initially worked as a War Recruitment Officer in his native Attock district and later served as one of the very first Indian Officers to receive the King's Commission, with the 2/67th Punjabis (later the 1/2 Punjab Regiment). As a result of his distinguished services in the World War and later, in the Third Afghan War, he was awarded an MBE by the Government of British India. After 1920, Sir Sikandar turned his talents to business and by dint of his financial acumen and managerial skills, soon became Director or Managing Director of several companies, including the Wah Tea Estate, The Amritsar-Kasur Railway Company, The People's Bank of Northern India, The Sialkot-Narowal Railway, The ACC Wah Portland Cement Company, the Wah Stone and Lime Company, Messrs. Owen Roberts, the Punjab Sugar Corporation Ltd, Messrs. Walter Locke & Co, The Lahore Electricity Supply Co and many others. He also entered grassroots politics at that time, and remained an Honorary Magistrate and Chairman of the Attock District Board.

In 1921, Sir Sikandar was elected to the Punjab Legislative Council and his effective political role now began. He became one of the main leaders of the Punjab Unionist Party [1](Later renowned as the Unionist Muslim League), an all-Punjab political party formed to represent the interests of the landed gentry and landlords of Punjab which included Muslims, Sikhs and Hindus. After an outstanding period of political enterprise between 1924-1934[6], he in due course took over leadership of the Unionist Party from Sir Fazli Husein. Khan led his party to victory in the 1937 elections, held under the Government of India Act 1935 and then governed the Punjab as Premier in coalition with the Sikh Akali Dal and the Indian National Congress.

Khan opposed the Quit India Movement of 1942[2] , and supported the Allied powers during World War II. Khan believed in politically cooperating with the British for the independence of India and the unity of Punjab.

In 1937, Jinnah signed the Sikander-Jinnah pact at Lucknow, merging the Muslim elements of his powerful Unionist force with the All India Muslim League, as a move towards reconciling the various Muslim elements in the Punjab and elsewhere in India, towards a common, united front for safeguarding their community rights and interests,[3]. He was also one of the chief supporters and architects of the Lahore Resolution, March 1940, calling for an autonomous or semi-independent Muslim majority region within the larger Indian confederation—which demand later led to the demand for creation of an independent Pakistan.