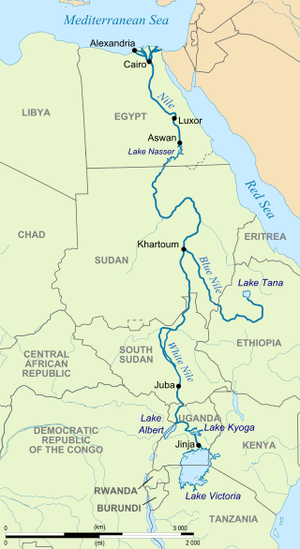 Sudan (Arabic: السودان‎ as-Sūdān) is an Arab republic in the Nile Valley of North Africa. It is the third largest country in Africa.

Sudan is bordered by Egypt to the north, the Red Sea, Eritrea and Ethiopia to the east, South Sudan to the south, the Central African Republic to the southwest, Chad to the west and Libya to the northwest. The Nile River divides the country into eastern and western halves.

The name derives from the Arabic bilād as-sūdān (بلاد السودان), or "the lands of the Blacks", an expression denoting West Africa and northern-Central Africa.[1]

Sudan was home to numerous ancient civilizations, such as the Kingdom of Kush, Kerma, Nobatia, Alodia, Makuria, Meroë and others, most of which flourished along the Nile River. During the predynastic period Nubia and Nagadan Upper Egypt were identical, simultaneously evolved systems of pharaonic kingship by 3300 BC.[4]

By virtue of its proximity to Egypt, the Sudan participated in the wider history of the Near East inasmuch as it was Christianized by the 6th century, and Islamized in the 7th. As a result of Christianization, the Old Nubian language stands as the oldest recorded Nilo-Saharan language (earliest records dating to the 9th century).

During the fifth millennium BC migrations from the drying Sahara brought neolithic people into the Nile Valley along with agriculture. The population that resulted from this cultural and genetic mixing developed social hierarchy over the next centuries become the Kingdom of Kush (with the capital at Kerma) at 1700 BC.

Anthropological and archaeological research indicate that during the predynastic period Nubia and Nagadan Upper Egypt were ethnically, and culturally nearly identical, and thus, simultaneously evolved systems of pharaonic kingship by 3300 BC.[5]

During Classical Antiquity, the Nubian capital was at Meroë. In early Greek geography, the Meroitic kingdom was known as Ethiopia (a term also used earlier by the Assyrians when encountering the Nubians). The civilization of Kush was among the first in the world to use iron smelting technology. The Nubian kingdom at Meroë persisted until the 4th century AD. After the collapse of the Kushite empire several states emerged in its former territories, among them Nubia.

Mahipal Singh Pilania (Lt. Col.) aged 51 years, who was on a peace keeping mission under UN forces was ambushed by armed men in Gurmuck in the volatile state of Jonlei in South Sudan on 10th April, 2013.

His body was consigned to flames at his native village, Surehati Pilania in district Mahendragarh in Haryana. He was cremated with full Military honours and his eldest daughter Jagriti performed last rites. Jagriti is a flying officer in Indian Air Force.

The Kingdom of Kush was an ancient Nubian state centered on the confluences of the Blue Nile, White Nile and River Atbara. It was established after the Bronze Age collapse and the disintegration of the New Kingdom of Egypt, centered at Napata in its early phase.

After King Kashta ("the Kushite") invaded Egypt in the 8th century BC, the Kushite kings ruled as Pharaohs of the Twenty-fifth dynasty of Egypt for a century before being defeated and driven out by the Assyrians. At the height of their glory, the Kushites conquered an empire that stretched from what is now known as South Kordofan all the way to the Sinai. King Piye attempted to expand the empire into the Near East, but was thwarted by the Assyrian king Sargon II. The Kingdom of Kush is mentioned in the Bible as having saved the Israelites from the wrath of the Assyrians, although disease among the besiegers was the main reason for the failure to take the city.[6]

The war that took place between King Taharqa and the Assyrian King Sennacherib was a decisive event in western history, with the Nubians being defeated in their attempts to gain a foothold in the Near East by Assyria. Sennacherib's successor Esarhaddon went further, and invaded Egypt itself, deposing Taharqa and driving the Nubians from Egypt entirely. Taharqa fled back to his homeland where he died two years later. Egypt became an Assyrian colony; however, king Tantamani, after succeeding Taharqa, made a final determined attempt to regain Egypt. Esarhaddon died while preparing to leave the Assyrian capital of Nineveh in order to eject him. However, his successor Ashurbanipal sent a large army into southern Egypt and routed Tantamani, ending all hopes of a revival of the Nubian Empire.