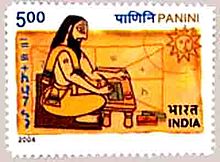 For more info see India as Known to Panini & its Index

Panini (पाणिनि) was a great Sanskrit grammarian and logician. He was born in Salatura in Gandhara (present day Kandahar) in modern Afghanistan, on the banks of the river Indus. He is also known as Salottariya and is said to be the descendant Panin and grandson of Devala. As his mother’s name was Daksha, he also bears the metronymic Daksheya (दाक्षेय) and Dakshiputra (दाक्षिपुत्र).[1] The phonic and semantic significance of Paninian root Jata is qualified as such by succeeding phrase Jata Jhata Sanghate (जट झट संघाते), used to denote the Samgha (संघ) of people.

As a child he was supposed to have been mediocre or even dull, but legend has it that by the blessings of Lord Siva he excelled as a scholar.

His magnum opus PANINIYAM is a testimony of his genius, a work which none has been able to surpass. This work placed him in the forefront of Sanskrit grammarians and something which others had imitated but never improved upon. In fact it has been compared to machine language for its perfect elegance and economy Panini’s works were however preceded by other works like UNADISUTRA, DHATUPATA and GANAPATHA. Panini was in fact a pioneer in Linguistics, because he works were path breaking in both descriptive and generative linguistics. Panini was a forerunner of modern formal language widely used in modern computer languages. Though the Backus Normal Form was discovered by Joseph Backus in 1959, Panini’s notation not only has equivalent power but also many similar properties. Paninian grammars have also been devised for non-Sanskrit languages too. The Backus-Naur form (Panini-Backus form) or BNF grammars is used to describe modern programming languages which have significant similarities to Pāṇini's grammar rules.

His work PANINIYAM is written in the form of sutras or aphorisms. There are 3996 aphorisms arranged in 8 (ASHTA) chapters (ADHYAHYA) and that is why PANINIYAM is popularly known as Ashtadhyayi. His work is very technical and systematic, and using inputs from Dhatupata and Ganapatha he developed algorithms for the development of well formed words. He analytically codified just about every aspect of spoken communication, tone, gestures, rhetorical devices, everything, so that people of future ages could reconstruct the correct recitation of the Vedic scriptures even if the living tradition of master to student might have lapsed. The book contains all the grammatical information needed for the study of Sanskrit and It begins with a comprehensive pronunciation guide and an introduction to the Devanagari alphabet with subsequent sections covering such topics as syntax, verb classes, and declension patterns.

The aphorisms are exceedingly terse and abstruse and that explains the various commentaries that have been written about it. KASIKAVRITTI by Vamana Jayaditya and SIDDHANTA KAUMUDI by Bhattojidikshita are some of the important ones. There were however scholars like Katyayana who had disapproved of Panini’s grammatical rules.

Though he is generally known as a famous grammarian yet he was also a geographer. In his work Ashtadhyayi, Panini provides the names of almost all major places and people from the Oxus in the North West to the Godavari in the south. He was the first to mention Suramas a region identified on the map with Surma valley in Bangla Desh.

The famed Sanskrit grammarian, Panini (पाणिनि) mentioned about the Jats in his classic, Aṣṭādhyāyī(अष्टाध्यायी), in the form of shloka as " जट झट सङ्घाते " (Jat Jhat Sanghate). And, this shloka highlights that the terms 'Jat' and 'democratic federation' are synonymous. He has also mentioned many Jat clans as settled in Punjab and North-West areas.

Hukum Singh Panwar (Pauria)[2] writes...From Father of History, Herodotus, to Father of Sanskrit grammar, Panini. The famous Sanskrit scholar, Panini, who gives Jata121 as one of the roots in the Dhatu-Path of his Ashtadhyayi, flourished in Gandhara122 a few centuries123 before Herodotus. Some Indian scholars124 ascribe the origin of the Jats to this root, but they

The Jats:Their Origin, Antiquity and Migrations: End of page 347

do so with a lot of hesitation because they think that sensu stricto Jata, as a root, does not convey any ethnic meaning. They ignore the fact that this term does suggest or imply cohesion, blending or mixing together (paraspar laganaisayat) 125 . The phonic and semantic significance of Paninian root Jata is qualified as such by succeeding phrase Jata Jhata Sanghate (जट झट संघाते) 126, highlighted by the later scholiasts127. It should thus be obvious that the term Jata-Jhata Samghate (जट झट संघाते) was used to denote the Samgha (संघ) of people, whoever they might be, and not of inanimate objects only. jata (जट) or jhata (झट) being the same in meaning and sound, Sanghate (संघाते) signifies union or corporation or confederacy. Panini128 himself mentions Ayudhajivi Samghas of the Indus valley, Gandhar and Panjab (Vahikadesh). The members of these confederacies of the warriors were-known by the collective noun Jata (जट)129, popular even today in that region as Jutt which according to Prajnadibhyasca Sutra of Panini, can without difficulty, become Jat (जाट) following the application of ana suffix 130.

It is common knowledge that in the history of any literature, poetry comes first, then prose, and the rudiments of grammar and etymology131 come last. Now it is generally conceded that Panini compiled his grammar when Vedic Sanskrit, having traveled the first two stages of its development, was on the decline132 as the language of the masses. Since Jat, as we ave noticed above, was the name of a General of Kartikeya in the Deva-Asura war 133 , there is every reason to believe that the term was in common use in the local dialects of Sindh an and Gandhar at the time of Panini. This fact is confirmed by Herodotus who wrote his history nearly two centuries later than Panini. Among of other things, he134 mentions Getae ( Jats, later Goths) as an appellation of the people of Scythia, popularly known as Scythians or Sakas, "a· group of the Aryan race" 134a. Such concurrence of evidence needs no elaboration. You "do not need a mirror to see the bracelet on your wrist", yet we would dwell on the topic still further in an effort to convince the sceptics. It is universally admitted that Ashtadhyayi retains words already in use and deals with their etymology. The word Jat, therefore, must have been in use, prior to Panini, The word, however, goes still further in to the past.

The Jats:Their Origin, Antiquity and Migrations: End of page 348

123. Panini's time is reckoned between 9th and 7th century B.C., but the general consensus is on 7th cen. B.C. (Gold Stucker, Bhandarkar, Pathak and Radha Kumur Mukerji) B.C. Bhaskara gives the date of Patanjali bet. 13th and 12the cen:B.C. in 'Chro. of Anc. Hindu His., Part I, pp. 99-100, Vijayawada-2. 1957. If we accept this, then Panini's date will naturally be pushed back by two centuries at least. Parameshwarananda gives the date of Panini as 2400 B.C. and that of Yaska as 2800 B.C. (Dev Sharma Niruktam, Introd. p. bb, (Hindi), Delhi, 1963. p. bb, Delhi, 1963. Weber (1914: 217) informs us on the authority of Renaud (Mem. Sur L' Inde, p. 88) that according to Hiuan Thsang there were two Paninis, one belonging to mythical times, while the other was the one who is commonly agreed upon as the "Father of Sanskrit Grammar", whom Hiuan Thsang knows as a Salanka from Salatura in Gandhara, and wrongly places him 500 years after Buddh's death, whereas 900 B.C.- 600 B.C. is the time bracket generally suggested for him by other scholars. Who was the genuine Panini has become a matter of controversy, which, may be in the absence of a definite proof, solved only by the gaze of a clairvoyant, who can reveal the mysteries of the past. The Panini of mythical times may be the real Panini. The older the evidence, the more reliable it is. The mythical Panini, who knows, maybe the Panini of 2400B.C., as claimed by Parameshwarananda. The issue calls for further investigation, especially in the light of our historical tradition, which is alleged to have been disparaged and distorted by vested interests.

Back to Sources of History/Jat Historians