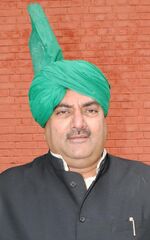 KHEL RATAN Abhay Singh Chautala (born on 14th February 1963) is younger son of Chaudhary Om Prakash Chautala and Smt. Sneh Lata. He has been actively associated with politics since his student days but after having done his B.A. in jumped in active politics. He started his political career by contesting election for the membership of his village Panchayat and served as Upsarpanch of Chautala village Panchayat for one term.

Haryana Assembly elections in October 2019 - Abhay fought this election from Ellenabad constituency as a candidate of Indian National Lok Dal (INLD). He got 57055 votes and defeated his rival BJP candidate.

In view of his popularity in the field of sports administration, Mr. Chautala has been elected President of the Indian Olympic Association for four years and his team took charge of the new responsibility w.e.f. 5th December 2012.

He forcefully raised the issues pertaining to the development needs of his constituency as a member of Haryana Legislative Assembly he served the people of his constituency by opening new educational institutions, building much needed roads and bridges, primary health centers and also provided other basic facilities to better the living conditions of the people. When he represented Rori constituency in the Haryana assembly, he successfully pleaded for opening one Government Engineering College “Jananayak Chaudhary Devi Lal Memorial College” at Panniwala Mota.

He believes that it is primary duty of the society and the government to provide facilities for education to girls so that they could be empowered in real terms. To meet this end, he has opened “Shrimati Haraki Devi Memorial College for Women,” where poor but meritorious girls are provided free boarding and lodging and fee concession. To bring the girls to the institution, free transportation facility is provided to those students who live in the nearby villages. Since he evinces keen interest in the development of education in rural areas, the members of the society running Gandhi Gramothan Vidyapith, Sangria approached him with a request to lend his helping hand in overcoming economic crisis being faced by it. He agreed and working as its president for the last about a dozen years has not only turned the society in surplus of funds but also facilitated opening of several job oriented and professional courses to meet the fast emerging scenario of globalization of economy.

In early 2005, he turned back to grass roots level politics and joined the election fray for the membership of Zila Parishad. He was elected President of the Zila Parishad, Sirsa District in 2005. He entered the Haryana Vidhan Sabha for the second time in 2010 as a custodian of the voice of the common people in general and the youth of the state in particular. He took great interest in the promotion of sports and games and as an MLA pushed the idea of popularizing and promoting sports in the rural areas in general and among girls of Haryana in particular.

As a result of his persistent effort the State Government adopted a new sports policy aimed at popularizing the sports and games, opening of rural stadiums in various parts of the State and increased diet allowance of the sports persons, reserved some per cent seats in government educational institutions and jobs in addition to promising handsome incentives and cash prizes to the sports persons winning medals in the Olympics, Asian Games, Common Wealth Games and the like international sports and games competitions. In recognition to his services to the cause of sports and games, he was elected president of Haryana Olympic Association and the Vice President of the Indian Olympic Association.

In addition, he is a no non-sense youth leader who believes in hard and result oriented work. He himself is a tireless worker and never shows signs of fatigue even though at times he devotes day and night towards hectic political activities. He does not hesitate to call a spade a spade. He loses no time to identify the flatterers and self seekers as he does not like sycophancy of any sort and even does not hesitate snubbing such elements publicly. He believes in doing the work in a thorough manner and always remains busy in furthering the cause of his political party namely the Indian National Lok Dal. He is a worker among the leaders and leader among the party workers and does not hold any post in the party organization. Over the years, he has emerged as a youth leader with mass appeal, especially among the youth.