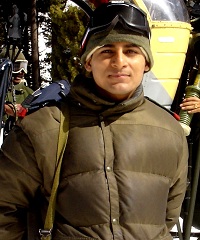 Lt. Amit Beniwal (b: 28-2-1985, d:17-11-2008) was born in Safipur village in Beri tahsil of Jhajjar district, Haryana. He laid down his life on 17 November 2008, while saving the life of his soldiers who were buried in a huge avalanche (near Line of Control at Gurez Sector). He laid down his life for saving the life of porters & soldiers in the finest traditions of Indian Army. 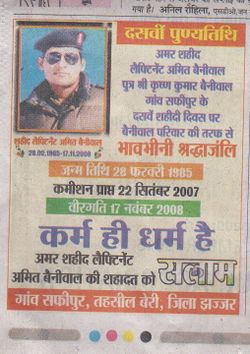 Lt. Amit Beniwal was a brave young officer attached with 8th Battalion, Bihar Regiment, the unit was posted in Gurez Sector (Line of Control) in 2008. He was the 2IC of Rifle Coy of his company, GHATAK PLATOON & Avalanche Rescue Operations In-charge of that area. On November 17th, 2008 while saving the life of his soldiers who were buried in a huge avalanche, he laid down his life for saving the life of porters & soldiers in the finest traditions of Indian Army. In merely 1 years of his service (24 years age at the time of martyrdom) in the army, he did his best. Though he knew that after avalanche the zone becomes a no-movement zone, still he tried to extend support to save lives of fellow soldiers. He made supreme sacrifice exhibiting extreme courage and camaraderie.[1]

Obituary in The Tribune, Chandigarh

By correspondence of Daily Tribune, Chandigarh.
Safipur (Jhajjar), November 23, 2008.
The mortal remains of Lieutenant Amit Kumar were consigned to the flames this morning in Safipur village here with full military and civil honours amid slogans of “Shaheed Amit Kumar amar rahe” and “Bharat mata ki jai” by a large numbers of villagers who had gathered to pay their last respects to this valiant soldier.

Sumit Kumar, elder brother of the martyr, lit the pyre and broke down at the time of the cremation. Amit Kumar was posted at Army Ordnance associated with 8 Bihar Regiment in Jammu.

A contingent of the Army and the Haryana police reversed arms and fired a volley of shots into the air while bidding farewell to the departed Army man. SDM Satyender Duhan, City Magistrate Virender Sangwan and tehsildar Raj Singh laid wreaths on behalf of the state government. Member of Parliament from Rohtak Deepender Singh Hooda also mourned the death of Lieutenant Amit Kumar.

Earlier, the body of the martyr was taken to his village where women members of the family and surrounding areas bade a tearful adieu to him. Heart-rending scenes were witnessed as women wailed and cried before the start of the funeral procession.

Amit Kumar, along with seven other jawans, was trapped in snow that lashed the whole Gurej area of the Jammu region on November 17 while he was searching for three members of his unit who had gone missing into snowfall on the way to their Headquarters. When Amit Kumar did not return, Army personnel started looking for him and they found the body of Amit Kumar in the Gurej area on November 20 last.

Krishan Beniwal, father of the martyr, said his son was one of the many who had laid down their lives and he was proud of his son.[2]