Achaemenid Empire at its greatest extent 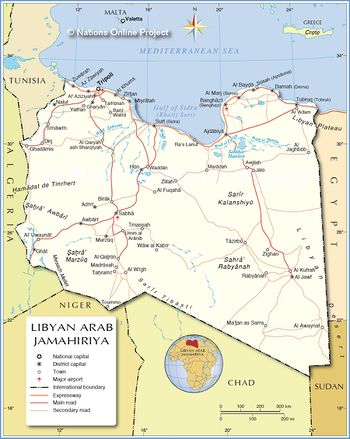 It occupied the coastal area of what is modern day Libya. As a Greek city it was part of the Cyrenaican Pentapolis along with the city of Cyrene itself.

According to most archeologists, it was situated at Marj, but according to Alexander Graham at Tolmeitha (Ptolemais).[1]

The city's name, Arabized as Barqah, came to refer to the former state and province of Cyrenaica.[2]

Barkē was founded by Greek colonists in the 7th century BC.

Early Christianity spread to the Pentapolis of North Africa from Egypt. Synesius of Cyrene (370–414), bishop of Ptolemais, received his instruction at Alexandria in both the Catechetical School and the Museion, and he entertained a great deal of reverence and affection for Hypatia, the last pagan Neoplatonists, whose classes he had attended. Synesius was raised to the episcopate by Theophilus, patriarch of Alexandria, in 410 A.D. Since the Council of Nicaea in 325 A.D., Cyrenaica had been recognized as an ecclesiastical province of the See of Alexandria, in accordance with the ruling of the Nicaean Fathers. The patriarch of the Coptic Church to his day includes the Pentapolis in his title as an area within his jurisdiction.[3]

After often being destroyed and then restored, during the Roman period it became a mere borough but was, nevertheless, the site of a bishopric. Its bishop, Zopyros, was present at the First Council of Nicaea in 325.[4] The subscriptions at Ephesus (431) and Chalcedon (451) give the names of two other bishops, Zenobius and Theodorus.

Barce was part of the Exarchate of Africa until it was conquered by the Arabs in AD 643–644 during the Islamic conquest of North Africa. It originally served as the capital of the Barqah province of the Caliphate. When the Ottoman Turks conquered the region in 1521 they used the Turkish form "Barka" for the province, but did not retain the city's status as its capital.

Barca is now a Roman Catholic titular see of Cyrenaica in Libya, Northern Africa, but vacant. The Eparchy of the Western Pentapolis was part of the Coptic Orthodox Church of Alexandria as the Pope of Alexandria was the Pope of Africa, the most senior position in The Holy Synod of the Coptic Orthodox Church after the Pope was the Metropolitan of Western Pentapolis, but since its demise in the days of Pope John VI of Alexandria as a major Archiepiscopal Metropolis and now being held as a Titular See attached to another Diocese.

During World War II, a battle for Barce of the North African campaign was won on 5 February 1941 by the 1st Field Regiment, Royal Australian Artillery. The regiment remembers this battle through the naming of its facilities at its base at Enoggera, Barce Lines.

H. W. Bellew [5] writes about an interesting discovery of Baraki tribe of Afghanistan. In this connection it may be allowable, perhaps, to conjecture in order to account for the existence at the present day, as I hope to show, in the extreme eastern provinces of the ancient Persian Empire, of tribes and nations whose original (in the time of Darius Hystaspes, at least,) seats were in its extreme western provinces — that the former association together of different nations for the payment of tribute, may have led in after times, to their location together in one province in some redistribution or other of the fiscal arrangements of the empire ; or, perhaps, nations and tribes, driven from their seats by internal revolutions or external conquests, may, from former association in the payment of tribute, have held together as friends and confederates for mutual support in their new settlements ; or, probably, they may have been transported, bag and baggage, by order of the king, from one extremity of the empire to the other for purely military purposes or as an exemplary punishment.

Of the last kind of transportation Herodotus has recorded an instance which is of the greatest interest and importance to us in this inquiry. He tells us (Bk. iv. 200, etc.) that, about the same time that Darius Hystaspes led his expedition across the Bosphorus against the Skythians, his governor of Egypt sent a naval and military force against the Greek colonies of Barke and Kyrene in Libya; and that after the Persians had captured Barke, they enslaved the Barkaians and took them to Egypt on their return from this expedition. By this time Darius also had returned from his Skythian campaign to his capital at Susa ; and Herodotus adds to what he had said of the Persians returning to Egypt from Libya, that

" the Barkaians whom they had enslaved, they transported from Egypt to the king ; and king Darius gave them a village in Baktria to dwell in. They gave then the name of Barke to this village, which was still inhabited in my time in the Baktrian territory."

And I may now repeat these words of Herodotus, and say that, after the lapse of about two thousand three hundred and fifty years, the village of Barke, which he mentions, is still in our day inhabited, and by the posterity, in name, at least, if got in lineal descent also, of the Barkaians he speaks of ; and that too in the very territory he indicates. The colony of Barkaians in Baktrian territory, of which the "Father of History " has thus informed us, is to-day represented by the Baraki tribe inhabiting the villages of Baraki in the Baghlan district of Kunduz, and of Barki Bark and Barki Rajan, in the Logar district of Kabul, which last is a tract comprised within the Bakhtar Zamiri or " Bakhtar territory," of Orientals, and the Baktriana of the Greeks.

The modern city on the same site, Marj, grew up around a 19th century Turkish fort. It was developed by the Italians during their colonial dominance of Libya and today has a population of 120,000. The Italian settlement was severely damaged in a 1963 earthquake and is now largely abandoned. No remains of the ancient settlement are visible, but some of the finds made during the Italian period are on display in the museum at nearby Ptolemais.