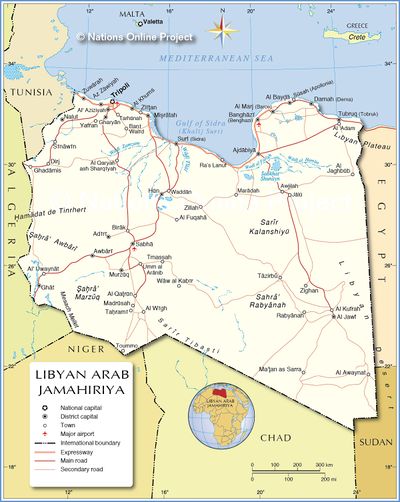 Kyrene or Cyrene (कयरेने) (Greek: Κυρήνη, Kyrēnē) was an ancient Greek colony and then a Roman city in present-day Shahhat, Libya, the oldest and most important of the five Greek cities in the region. It gave eastern Libya the classical name Cyrenaica that it has retained to modern times.

Cyrene was founded in 630 BC as a settlement of Greeks from the Greek island of Thera (Santorini), traditionally led by Battus I, at a site ten miles from its associated port, Apollonia (Marsa Sousa). Traditional details concerning the founding of the city are contained in Herodotus' Histories IV. Cyrene promptly became the chief town of ancient Libya and established commercial relations with all the Greek cities, reaching the height of its prosperity under its own kings in the 5th century BC. Soon after 460 BC it became a republic. In 413 BC, during the Peloponnesian War, Cyrene supplied Spartan forces with two triremes and pilots. After the death of Alexander III of Macedon (323 BC), the Cyrenian republic became subject to the Ptolemaic dynasty.

Ophelas, the general who occupied the city in Ptolemy I's name, ruled the city almost independently until his death, when Ptolemy's son-in-law Magas received governorship of the territory. In 276 BC Magas crowned himself king and declared de facto independence, marrying the daughter of the Seleucid king and forming with him an alliance in order to invade Egypt. The invasion was unsuccessful and in 250 BC, after Magas' death, the city was reabsorbed into Ptolemaic Egypt. Cyrenaica became part of the Ptolemaic empire controlled from Alexandria, and became Roman territory in 96 BC when Ptolemy Apion bequeathed Cyrenaica to Rome. In 74 BC the territory was formally transformed into a Roman province.

The inhabitants of Cyrene at the time of Sulla (c. 85 BC) were divided into four classes: citizens, farmers, resident aliens, and a minority population of Jews. The ruler of the town, Apion, bequeathed it to the Romans, but it kept its self-government. In 74 BC Cyrene was created a Roman province; but, whereas under the Ptolemies the Jewish inhabitants had enjoyed equal rights, they now found themselves increasingly oppressed by the now autonomous and much larger Greek population. Tensions came to a head in the insurrection of the Jews of Cyrene under Vespasian (73 AD, the First Roman-Jewish War) and especially Trajan (117 AD, the Kitos War). This revolt was quelled by Marcius Turbo, but not before huge numbers of people had been killed. According to Eusebius of Caesarea the outbreak of violence left Libya depopulated to such an extent that a few years later new colonies had to be established there by the emperor Hadrian just to maintain the viability of continued settlement.

Plutarch in his work De mulierum virtutibus ("On the Virtues of Women") describes how the tyrant of Cyrene, Nicocrates, was deposed by his wife Aretaphila of Cyrene around the year 50 BC

Cyrene is now an archeological site near the village of Shahhat. One of its more significant features is the temple of Apollo which was originally constructed as early as 7th century BC. Other ancient structures include a temple to Demeter and a partially unexcavated temple to Zeus There is a large necropolis approximately 10 km between Cyrene and its ancient port of Apollonia.

In 2005, Italian archaeologists from the University of Urbino discovered 76 intact Roman statues at Cyrene from the 2nd century AD. The statues remained undiscovered for so long because “during the earthquake of 375 AD, a supporting wall of the temple fell on its side, burying all the statues. They remained hidden under stone, rubble and earth for 1,630 years. The other walls sheltered the statues, so we were able to recover all the pieces, even works that had been broken."