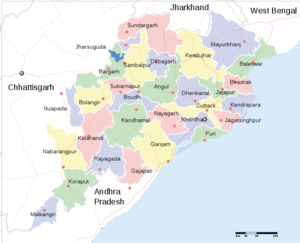 Boudh (बौध) is a town and district in the state of Odisha, India.

It is the district headquarters of Boudh district. It is located on the bank of Mahanadi River, the largest river of the state of Odisha.

Baudh State, also known as Boudh State, was one of the princely states of India during the period of the British Raj. It was recognized as a state in 1874[1] and had its capital in Boudh town. Its last ruler signed the accession to the Indian Union on 1 January 1948. The formerly princely state's territory is now within Boudh District.

Baudh was one among the 26 Feudatory States of Orissa. According to legend the state originated in a preexisting state that had been founded centuries before by a Brahmin who adopted as successor a nephew of the Raja of Keonjhar.[2]