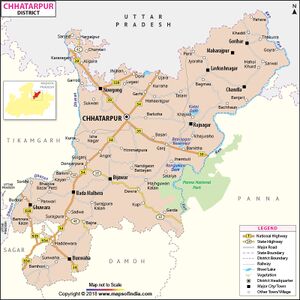 Bijawar (बिजावर) is a city in Chhatarpur district in the state of Madhya Pradesh, India.

Col. G. B. Malleson[1] writes that The founder of the little state of Bijawar was Barsing Deo, an illegitimate son of Juggut Raj, who was the second son of the famous Chatter Sal. The present ruler, Bhao Pertab Singh, is fourth in descent from Barsing Deo. He rendered good service in the mutinies, for which he received a dress of honour, and the hereditary right to a salute of eleven guns. He has been allowed the right of adoption. The area of Bijawar is 920 square miles, the population 90,000, and the revenue 3,50,000 rupees.

Bijawar was formerly the capital of a princely state of British India of the same name. The native state of Bijawar covered an area of 2520 km2 in the Bundelkhand Agency. Forests covered nearly half the total area of the state, which was believed to be rich in minerals, but lack of transport facilities had hindered the development of its resources.

The state takes its name from the chief town, Bijawar, which was founded by Bijai Singh, one of the Gond chiefs of Garha Mandla, in the 17th century.

The first ruler of the state was Bir Singh Deo (1765–93), a Bundela Rajput descended from the ruler of Orchha. It was conquered in the 18th century by Chhatarsal, the founder of Panna, a Rajput of the Bundela clan, by whose descendants it was held till its accession to India. It was confirmed to Ratan Singh in 1811 by the British government for the usual deed of allegiance. In 1857 Bhan Pratap Singh rendered signal services to the British during the Mutiny, being rewarded with certain privileges and a hereditary salute of eleven guns. In 1866 he received the title of Maharaja, and the prefix Sawai in 1877. Bhan Pratap was succeeded on his death in 1899 by his adopted son, Sanwant Singh, a son of the Maharaja of Orchha.[2][3]

The state acceded to India on 1 January 1950, and became part of the state of Vindhya Pradesh, which was merged into Madhya Pradesh on 1 November 1956.

Bijawar is also known for Jatashankar, a holy place about 18 km from the town. Bijawar is also known for Janki Nibas Temple because it is similar to Ayodhya Temple. Another famous temple, Kanchan Temple, was built by Maharani Kanchan Kuwar of Bijawar. Maharani Kanchan Kuwar was born in Karahiya and Princes of Karahiya and was the daughter of Rao Shahab of Karahiya.

Rulers: The rulers belonged to the Bundela dynasty. Rajas