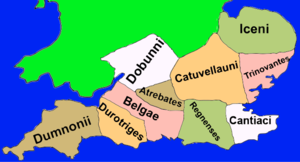 Cantiaci or Cantii were an Iron Age Celtic people living in Britain before the Roman conquest, and gave their name to a civitas of Roman Britain. They lived in the area now called Kent, in south-eastern England. Their capital was Durovernum Cantiacorum, now Canterbury.

They were bordered by the Regnenses to the west, and the Catuvellauni to the north.

Battle of the Medway

The Battle of the Medway took place in 43 AD, probably on the River Medway in the lands of the Iron Age tribe of the Cantiaci, now the English county of Kent. Other locations for the battle have been suggested but are less likely. This was an early battle in the Claudian invasion of Britain, led by Aulus Plautius. On the news of the Roman landing, the British tribes united to fight them under the command of Togodumnus and his brother Caratacus of the Catuvellauni tribe. After losing two initial skirmishes in eastern Kent, the natives gathered on the banks of a river further west to face the invaders.[1]

At the same time, the Romans received the surrender of the Dobunni tribe in western Britain. The Dobunni were subjects of the Catuvellauni, and this diplomatic gain was probably a blow to native morale and manpower.

Julius Caesar landed in Cantium in 55 and 54 BCE, the first Roman expeditions to Britain. He recounts in his De Bello Gallico v. 14:

"Of all these (British tribes), by far the most civilised are they who dwell in Kent, which is entirely a maritime region, and who differ but little from the Gauls in their customs."

Julius Caesar named five Celtic tribes inhabiting the land that would become the "heartland of the Catuvellauni": the Ancalites, the Bibroci, the Cassi, the Cenimagni, and the Segontiaci, each with their own 'king' or chieftain. He found their way of life to be very similar to their cousins in Gaul with whom they were close - the invasion of Britain may have been triggered by the Britons' supply of arms to the Gauls, who were being subjugated by the Romans.[2]

Caesar mentions four kings, Segovax, Carvilius, Cingetorix, and Taximagulus, who held power in Cantium at the time of his second expedition in 54 BCE. The British leader Cassivellaunus, besieged in his stronghold north of the Thames, sent a message to these four kings to attack the Roman naval camp as a distraction. The attack failed, a chieftain called Lugotorix was captured, and Cassivellaunus was forced to seek terms.

In the century between Caesar's expeditions and the conquest under Claudius (starting in 43 CE), kings in Britain began to issue coins stamped with their names. The following kings of the Cantiaci are known:

According to Nennius, Gwrangon was King of Kent in the time of Vortigern, until Vortigern took away the kingdom and gave it to Hengist; but Nennius is regarded as an untrustworthy source, and "Gwrangon seems to have been transported by the story-teller into Kent from Gwent" and "is turned into an imaginary King of Kent, secretly disposed of his realm in favour of Hengist, whose daughter Vortigern wished to marry".[4]