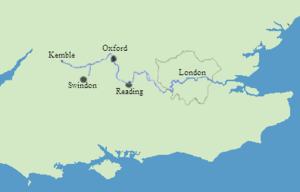 River Thames (/tɛmz/ ) is a river that flows through southern England, most notably through London.

It flows through Oxford (where it is called the Isis), Reading, Henley-on-Thames and Windsor. The lower reaches of the river are called the Tideway, derived from its long tidal reach up to Teddington Lock. It rises at Thames Head in Gloucestershire, and flows into the North Sea via the Thames Estuary. The Thames drains the whole of Greater London.[1] Its catchment area covers a large part of south-eastern and a small part of western England; the river is fed by 38 named tributaries. The river contains over 80 islands. With its waters varying from freshwater to almost seawater, the Thames supports a variety of wildlife and has a number of adjoining Sites of Special Scientific Interest, with the largest being in the remaining parts of the North Kent Marshes.[2]

The Thames, from Middle English Temese, is derived from the Brittonic Celtic name for the river, Tamesas (from *tamēssa),[3] recorded in Latin as Tamesis and yielding modern Welsh Tafwys "Thames". The name may have meant "dark" and can be compared to other cognates such as Russian темно (Proto-Slavic *tĭmĭnŭ), Lithuanian tamsi "dark", Latvian tumsa "darkness", Sanskrit tamas and Welsh tywyll "darkness" (Proto-Celtic *temeslos) and Middle Irish teimen "dark grey".[4] The same origin is shared by countless other river names, spread across Britain, such as the River Tamar at the border of Devon and Cornwall, several rivers named Tame in the Midlands and North Yorkshire, the Tavy on Dartmoor, the Team of the North East, the Teifi and Teme of Wales, the Teviot in the Scottish Borders, as well as one of the Thames' tributaries called the Thame.

Kenneth H. Jackson has proposed that the name of the Thames is not Indo-European (and of unknown meaning),[5] while Peter Kitson suggested that it is Indo-European but originated before the Celts and has a name indicating "muddiness" from a root *tā-, 'melt'.[6]

Indirect evidence for the antiquity of the name 'Thames' is provided by a Roman potsherd found at Oxford, bearing the inscription Tamesubugus fecit (Tamesubugus made [this]). It is believed that Tamesubugus' name was derived from that of the river.[7] Tamese was referred to as a place, not a river in the Ravenna Cosmography (c. AD 700).

The river's name has always been pronounced with a simple t /t/; the Middle English spelling was typically Temese and the Brittonic form Tamesis. A similar spelling from 1210, "Tamisiam", is found in the Magna Carta.[8]

The Thames through Oxford is sometimes called the Isis. Historically, and especially in Victorian times, gazetteers and cartographers insisted that the entire river was correctly named the Isis from its source down to Dorchester on Thames and that only from this point, where the river meets the Thame and becomes the "Thame-isis" (supposedly subsequently abbreviated to Thames) should it be so called. Ordnance Survey maps still label the Thames as "River Thames or Isis" down to Dorchester. However, since the early 20th century this distinction has been lost in common usage outside of Oxford, and some historians suggest the name Isis is nothing more than a truncation of Tamesis, the Latin name for the Thames. Sculptures titled Tamesis and Isis by Anne Seymour Damer can be found on the bridge at Henley-on-Thames, Oxfordshire (the original terracotta and plaster models were exhibited at the Royal Academy, London, in 1785. They are now on show at the River and Rowing Museum in Henley).[9]

Richard Coates suggests that while the river was as a whole called the Thames, part of it, where it was too wide to ford, was called *(p)lowonida. This gave the name to a settlement on its banks, which became known as Londinium, from the Indo-European roots *pleu- "flow" and *-nedi "river" meaning something like the flowing river or the wide flowing unfordable river.[10]

The usually quoted source of the Thames is at Thames Head (at grid reference ST980994). This is about 3⁄4 mile north of Kemble parish church in southern Gloucestershire, near the town of Cirencester, in the Cotswolds.[11]

However, Seven Springs near Cheltenham, where the Churn (which feeds into the Thames near Cricklade) rises, is also sometimes quoted as the Thames' source,[12] as this location is furthest from the mouth, and adds some 14 miles (23 km) to the length. At Seven Springs above the source is a stone with the Latin hexameter inscription "Hic tuus o Tamesine pater septemgeminus fons", which means "Here, O Father Thames, [is] your sevenfold source".[13]

The springs at Seven Springs flow throughout the year, while those at Thames Head are only seasonal (a winterbourne). The Thames is the longest river entirely in England, but the River Severn, which is partly in Wales, is the longest river in the United Kingdom. As the River Churn, sourced at Seven Springs, is 14 miles (23 km) longer than the Thames (from its traditional source at Thames Head to the confluence), the overall length of the Thames measured from Seven Springs, 229 miles (369 km), is greater than the Severn's length 220 miles (350 km). Thus, the "Churn/Thames" river may be regarded as the longest natural river in the United Kingdom.

The stream from Seven Springs is joined at Coberley by a longer tributary which could further increase the length of the Thames, with its source in the grounds of the National Star College at Ullenwood.

The Thames flows through or alongside Ashton Keynes, Cricklade, Lechlade, Oxford, Abingdon-on-Thames, Wallingford, Goring-on-Thames and Streatley, Pangbourne and Whitchurch-on-Thames, Reading, Wargrave, Henley-on-Thames, Marlow, Maidenhead, Windsor and Eton, Staines-upon-Thames and Egham, Chertsey, Shepperton, Weybridge, Sunbury-on-Thames, Walton-on-Thames, Molesey and Thames Ditton. The river was subject to minor redefining and widening of the main channel around Oxford, Abingdon and Marlow before 1850, since when further cuts to ease navigation have reduced distances further.

Molesey faces Hampton, London, and in Greater London the Thames passes Hampton Court Palace, Surbiton, Kingston upon Thames, Teddington, Twickenham, Richmond (with a famous view of the Thames from Richmond Hill), Syon House, Kew, Brentford, Chiswick, Barnes, Hammersmith, Fulham, Putney, Wandsworth, Battersea and Chelsea. In central London, the river passes Pimlico and Vauxhall, and then forms one of the principal axes of the city, from the Palace of Westminster to the Tower of London. At this point, it historically formed the southern boundary of the medieval city, with Southwark, on the opposite bank, then being part of Surrey.

Some of the earliest written references to the Thames (Latin: Tamesis) occur in Julius Caesar's account of his second expedition to Britain in 54 BC,[14] when the Thames presented a major obstacle and he encountered the Iron Age Belgic tribes the Catuvellauni and the Atrebates along the river. The confluence of the Thames and Cherwell was the site of early settlements and the River Cherwell marked the boundary between the Dobunni tribe to the west and the Catuvellauni tribe to the east (these were pre-Roman Celtic tribes).

In the late 1980s a large Romano-British settlement was excavated on the edge of the village of Ashton Keynes in Wiltshire.

In AD 43, under the Emperor Claudius, the Romans occupied England and, recognising the river's strategic and economic importance, built fortifications along the Thames valley including a major camp at Dorchester. Cornhill and Ludgate Hill provided a defensible site near a point on the river both deep enough for the era's ships and narrow enough to be bridged; Londinium (London) grew up around the Walbrook on the north bank around the year 47. Boudica's Iceni razed the settlement in AD 60 or 61 but it was soon rebuilt and, following the completion of its bridge, it grew to become the provincial capital of the island.

The next Roman bridges upstream were at Staines) on the Devil's Highway between Londinium and Calleva (Silchester). Boats could be swept up to it on the rising tide with no need for wind or muscle power. Middle Ages

A Romano-British settlement grew up north of the confluence, partly because the site was naturally protected from attack on the east side by the River Cherwell and on the west by the River Thames. This settlement dominated the pottery trade in what is now central southern England, and pottery was distributed by boats on the Thames and its tributaries.

Competition for the use of the river created the centuries-old conflict between those who wanted to dam the river to build millraces and fish traps and those who wanted to travel and carry goods on it. Economic prosperity and the foundation of wealthy monasteries by the Anglo-Saxons attracted unwelcome visitors and by around AD 870 the Vikings were sweeping up the Thames on the tide and creating havoc as in their destruction of Chertsey Abbey.

Once King William had won total control of the strategically important Thames Valley, he went on to invade the rest of England. He had many castles built, including those at Wallingford, Rochester, Windsor and most importantly the Tower of London. Many details of Thames activity are recorded in the Domesday Book. The following centuries saw the conflict between king and barons coming to a head in AD 1215 when King John was forced to sign the Magna Carta on an island in the Thames at Runnymede. Among a host of other things, this granted the barons the right of Navigation under Clause 23.

Another major consequence of John's reign was the completion of the multi-piered London Bridge, which acted as a barricade and barrage on the river, affecting the tidal flow upstream and increasing the likelihood of the river freezing over. In Tudor and Stuart times, various kings and queens built magnificent riverside palaces at Hampton Court, Kew, Richmond on Thames, Whitehall and Greenwich.

As early as the 1300s, the Thames was used to dispose of waste matter produced in the city of London, thus turning the river into an open sewer. In 1357, Edward III described the state of the river in a proclamation: "... dung and other filth had accumulated in divers places upon the banks of the river with ... fumes and other abominable stenches arising therefrom."[15]

The growth of the population of London greatly increased the amount of waste that entered the river, including human excrement, animal waste from slaughter houses, and waste from manufacturing processes. According to historian Peter Ackroyd, "a public lavatory on London Bridge showered its contents directly onto the river below, and latrines were built over all the tributaries that issued into the Thames."[16]

Arrian[17]writes...."The Royal Diary also says that Peithon, Attains, Demophon, and Peucestas, as well as Cleomenes, Menidas, and Seleucus, slept in the temple of Serapis, and asked the god whether it would be better and more desirable for Alexander to be carried into his temple, in order as a suppliant to be cured by him." ...

Serapis, or more correctly Sarapis, was an Egyptian deity, whose worship was introduced into Greece in the time of the Ptolemies. His worship was introduced into Borne, with that of Isis, in the time of Sulla. Strabo (xvii. 1) gives an account of his cultus in the celebrated temple at Canobus. The Serapeum at Alexandria, which contained the famous library, is described by Ammianus, xxii 16.