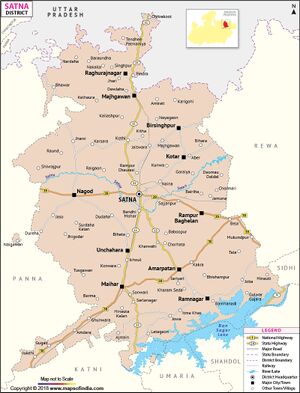 Satna (सतना) is a city and district in Madhya Pradesh. It is Satna is a border city of the state and is touched by the borders of state of Uttar Pradesh.

Satna got its name from Sutna or Satna river flowing in its vicinity. It is said that this river got its name from the name of popular rishi called "Suteekshna Muni" of ancient times of Ramayana period (ref. "Satna Nagar" written by Shivanand).

A long history is associated with places in Satna district. In Ramayana Era Lord Rama is said to have stayed in the region of Chitrakoot, half of it is in the outskirts of Satna district, shared with Uttar Pradesh, which contains the rest.

Nearby, at Bharhut, there are the remains of a 2nd century BC Buddhist stupa, first discovered in 1873 by Cunningham.

Lord Shiva Temple at Birsinghpur is also a famous and old temple in the region.

Maihar is an important pilgrim.

The early Buddhist books (including the Mahabharata) link the Baghelkhand tract with rulers of the Haihaya, Kalchuri or Chedi clan, who gained sufficient importance in the 3rd century CE. They had their capital at Mahishmati, identified by some with Maheshwar in Khargone District, from where they seem to have been driven eastwards. They had acquired the fort of Kalinjara (a few miles beyond the border of the district, in Uttar Pradesh), and with that as base, they extended their dominious over Baghelkhand.

During the 4th and 5th centuries, the Gupta dynasty held sway over the area. The feudatory chiefs of Uchchhakalpa (Unchehra in Nagod tehsil) and the Parivrajakas of Kot (in Nagod tehsil) held their own. The chief stronghold of the Chedi clan was Kalinjar, and their proudest title was Kalanjaradhishwara (Lord of Kalanjar).

The Kalchuris received their first blow at the hand of Chandel chief Yashovarmma (925-55), who seized the fort of Kalinjar and the tract surrounding it. The Kalchuris were still a powerful tribe and continued to hold most of their possessions until the 12th century.

The chiefs of Rewas were Baghel Rajputs descended from the Solanki clan. Vyaghra Deo, brother of the ruler of Gujarat, made his way into northern India about the middle of the 13th century and obtained the fort of Marpha, 18 miles north-east of Kalinjar. His son Karandeo married a Kalchuri (Haihaya) princess of Mandla and received in dowry the fort of Bandhogarh (now in the tehsil of the same name in Shahdol district), which, until its destruction in 1597 by Akbar was the Baghel capital.[1]

In 1298, when Ulugh Khan drove the last Baghel ruler of Gujarat from his kingdom. It caused a considerable migration of the Baghels to Bandhogarh.

Until the 15th century the Baghels of Bandhogarh were engaged in extending their possessions and escaped the attention of the Delhi kings. In 1498-9, Sikandar Lodi failed in his attempt to take the fort of Bandhogarh. The Baghel king Ramchandra (1555–92), was a contemporary of Akbar. After the death of Birdhabra, Ramchandra's son, a minor named Vikramaditya acceded to the throne of Bandhogarh. His accession gave rise to disturbances. Akbar intervened and captured and dismantled the Bandhogarh fort in 1597 after a seize of eight months. It is after this that the town of Rewa started gaining in importance.[2]

In 1803, after the treaty of Bassein, the British made overtures of alliance to the ruler of Rewa, but the latter rejected them. In 1812, during the time of Raja Jaisingh (1809–35), a body of Pindaris raided Mirzapur from Rewa territory. Upon this Jaisingh was called upon to accede to a treaty, in which he acknowledged the protection of the British Government, and agreed to refer all disputes with neighbouring chiefs to their arbitration and to allow British troops to march through or be cantoned in his territories.

At the mutiny of 1857, Maharaja Raghuraj Singh helped the British in quelling the uprisings in the neighbouring Mandla and Jabalpur district, and in Nagod which is now a part of Satna district. For this, the king was rewarded by restoration to him of the Sohagpur (Shahdol) and Amarkantak parganas, which had been seized by the Marathas in the beginning of the century.

The rulers of Rewa State bore the title of 'His Highness' and "Maharaja" and received a salute of 17 guns. Most of the Raghuraj Nagar and entire Amarpatan tehsil of the present Satna district were in the Rewa State prior to the formation of Vindhya Pradesh.[3] 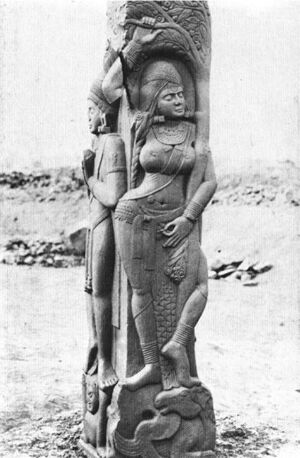 Back to Places /Madhya Pradesh