From Jatland Wiki
Jump to navigation Jump to search
Ramayana 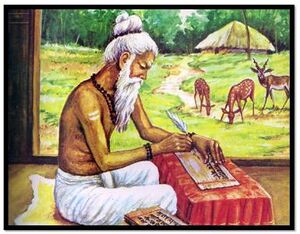 Maharishi Valmiki - Author of Ramayana - A painting by an artiste 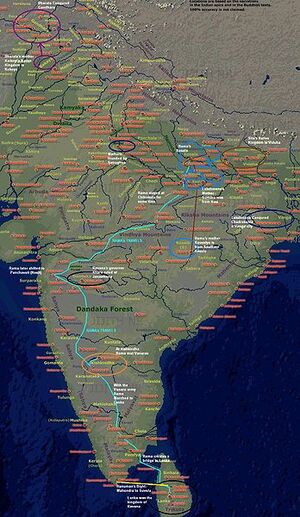 Places Related to Ramayana in Rama's journey from Ayodhya to Lanka.

Rāmāyaṇa (रामायण) is an ancient Sanskrit epic attributed to the Hindu sage (maharishi) Valmiki and an important part of the Hindu canon (smṛti). It was the original story on which other versions were based such as the Thai Ramakien, the Lao Phra Lak Phra Lam and the Malay Hikayat Seri Rama.

Divisions of Ramayana into Kandas

Valmiki Ramayana has been traditionally divided into seven books known as Kanda, dealing with the life of Rama from his birth to his death.

The name Rāmāyaṇa is a tatpurusha compound of Rāma and ayana "going, advancing", translating to "Rāma's Journey". The Rāmāyaṇa consists of 24,000 verses in seven books, and 500 cantos (kāṇḍas) [1] and tells the story of Rāma, whose wife Sita is abducted by the demon (Rākshasa) king of Lanka, Rāvana. Thematically, the epic explores themes of human existence and the concept of dharma.[2]

The characters of Rama, Sita, Lakshmana, Bharata, Hanumān and Rāvana (the villain of the piece) are all fundamental to the cultural consciousness of India.

According to literary scholarship, the main body of the Ramayana first appeared as an oral composition somewhere between 750 to 500 BC. Cultural evidence (the presence of sati in the Mahabharata but not in the main body of the Ramayana) suggests that the Ramayana predates the Mahabharata [3] Traditionally the epic belongs to the Treta Yuga, one of the four eons (yuga) of Hindu chronology, and is dated as far back as 880,000 years in the past. [4] Rama is said to have been born in the Treta Yuga to King Daśaratha in ikshuaku vansh (clan) [5]