Jāti (जाति) or Caste is a system of social stratification. Jāti may be translated as caste, and refers to birth. The term caste is not an Indian word. According to the Oxford English Dictionary, it is derived from the Portuguese casta, meaning "race, lineage, breed" and, originally, "‘pure or unmixed (stock or breed)".[1] There is no exact translation in Indian languages, but varna and jāti are the two most proximate terms.[2]

The English word "caste" derives from the Spanish and Portuguese casta, which the Oxford English Dictionary quotes John Minsheu's Spanish dictionary (1599) to mean, "race, lineage, or breed".[3] When the Spanish colonized the New World, they used the word to mean a "clan or lineage." However, it was the Portuguese who employed casta in the primary modern sense when they applied it to the thousands of in-marrying hereditary Indian social groups they encountered upon their arrival in India in 1498.[4]

The use of the spelling "caste," with this latter meaning, is first attested to in English in 1613.[5]

The names of jātis are usually derived from occupations, and considered to be hereditary and endogamous, but this may not always have been the case. The jātis developed in post-Vedic times, possibly from crystallisation of guilds during its feudal era. The jātis are often thought of as belonging to one of the four varnas.

Jāti (जाति) is mentioned by Panini in Ashtadhyayi. [6]

The terms varna (theoretical classification based on occupation) and Jāti (caste) are two distinct concepts. Jāti (community) refers to the thousands of endogamous groups prevalent across the subcontinent. A jati may be divided into exogamous groups based on the same Gotras. The classical authors scarcely speak of anything other than the varnas; even Indologists sometimes confuse the two.[8]

V. S. Agrawala [9] writes about Varṇa and Jāti – Panini mentions members of the same as Savarṇa (from samāna varna, VI.3.85) . However, term Jāti is more is used more often for caste. In early Vedic texts it had only the sense of family. In Ashtadhyayi an individual member of a caste is designated bandhu in relation to his Jāti. ‘The affix chha is added (īya) is added to a word ending in the word Jāti, when it denotes a bandhu’. The term bandhu implies relationship, thus pointing to the fact that the Jāti had evolved out of the common bond of mutual kinship.

Historically, the caste system in India has consisted of thousands of endogamous groups called Jatis or Quoms (among Muslims).

Starting with the British colonial Census of 1901 led by Herbert Hope Risley, all the Jatis were grouped under the theoretical varnas categories.[10] According to political scientist Lloyd Rudolph, Risley believed that varna, however ancient, could be applied to all the modern castes found in India, and "[he] meant to identify and place several hundred million Indians within it."[11]

The terms varna (conceptual classification based on occupation) and jāti (caste) are two distinct concepts: while varna is the idealised four-part division envisaged by the Twice-Borns, jāti (community) refers to the thousands of actual endogamous groups prevalent across the subcontinent. The classical authors scarcely speak of anything other than the varnas, as it provided a convenient shorthand; but a problem arises when even Indologists sometimes confuse the two.[12]

Varna may be translated as "class," and refers to the four social classes which existed in the Vedic society, namely Brahmins, Kshatriyas, Vaishyas and Shudras.[13]

Jāti may be translated as caste, and refers to birth. The names of jātis are usually derived from occupations, and considered to be hereditary and endogamous, but this may not always have been the case. The jātis developed in post-Vedic times, possibly from crystallisation of guilds during its feudal era.[14] The jātis are often thought of as belonging to one of the four varnas.[15]

Literally varna means colour, and was a framework for classifying people into classes, first used in Vedic Indian society.[16] The four classes were[17] -

The varna categorisation implicitly had a fifth element, being those people deemed to be entirely outside its scope, such as tribal people and the untouchables.[18]

Jāti, meaning birth, is mentioned much less often in ancient texts, where it is clearly distinguished from varna. There are four varnas but thousands of jātis.[19] The jātis are complex social groups that lack universally applicable definition or characteristic, and have been more flexible and diverse than was previously often assumed.[20]

There are at least two perspectives for the origins of the caste system in ancient and medieval India.[21][22] One focuses on the ideological factors which are claimed to drive the caste system and holds that caste rooted in the four varnas. This perspective was particularly common among scholars of the British colonial era and was articulated by Dumont, who concluded that the system was ideologically perfected several thousand years ago and has remained the primary social reality ever since. This school justifies its theory primarily by citing Manusmriti and disregards economic, political or historical evidence.[23][24]

According to Gupta, during the Mauryan period guilds developed,[31] which crystallised into jatis[32] in post-Mauryan times with the emergence of feudalism in India, which finally crystallised from the 7th to the 12th century.[33] However, other scholars dispute when and how jatis developed in Indian history. Barbara Metcalf and Thomas Metcalf, both professors of History, write, "One of the surprising arguments of fresh scholarship, based on inscriptional and other contemporaneous evidence, is that until relatively recent centuries, social organisation in much of the subcontinent was little touched by the four varnas. Nor were jati the building blocks of society."[34]

According to Basham, ancient Indian literature refers often to varnas, but hardly if ever to jātis as a system of groups within the varnas. He concludes that "If caste is defined as a system of group within the class, which are normally endogamous, commensal and craft-exclusive, we have no real evidence of its existence until comparatively late times."[35] 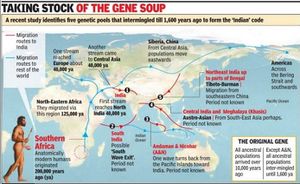 Taking Stock of the Gene Soup

India's present diverse population arose from five types of ancient populations that freely mixed and interbred for thousands of years before the rigid caste system, with its principle of prohibition of marriage outside the caste, put an end to this mixing. This ancient history hinted at in various linguistic, archeological and genetic studies has been confirmed by a path-breaking genetic study recently published.

Researchers from the National Institute of Biomedical Genomics (NIBMG) at Kalyani, West Bengal, analysed DNA samples of 367 unrelated Indians belonging to 20 population groups. These covered castes from different parts of India, and most large tribal populations from central and Northeastern India. Also included were samples from two Andaman & Nicobar tribes.

The study compared genetic sequences from Indian samples with those from Central Asia, West Asia, China and adjacent regions to trace how humans first arrived in India.

What the study also unearthed was the deep imprint of a significant social cultural process in Indian society . It found that interbreeding between communities `abruptly' ended around 70 generations ago, which translates to about 1,575 (70 x 22.5) years ago, sometime in the 6th century .

It coincided with the period when the Gupta Empire ruled India. This period had seen the consolidation and supremacy of the caste system, entrenched through the sanction of scriptures as well as enforcing mechanisms of the rulers.

The genetic revelations corroborate India's history.The genetic mixing was contained by the prescription of a social construct.

David Reich of the Harvard Medical School, known for his extensive genetic analysis from samples of two main ancestral populations of India - North Indians and South Indians told TOI that the new study goes beyond his work by including smaller populations of Autro-Asians, Tibeto-Burmans and Andamanese and Nicobarese.

David Reich cautioned, however, that Majumder and his team's calculation could have erred as they used certain statistical methods software, and also considered 22.5 years as the span of one generation. "Standard citation in genetics literature is 29 years based on studies in many diverse societies around the world. We usually use 29 years and that would give substantially older calendar dates than the authors cite.