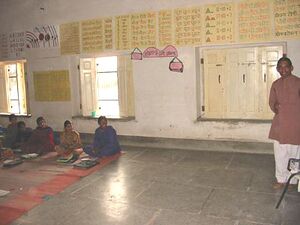 Chetan Ram Godara, is the founder of 'Urmul Jyoti Sansathan (UJS)'.Urmul Jyothi Sansthan (UJS) started its efforts in 1995. It is an offshoot of Urmul Trust, which has done legendary work in promoting the co-operative movement in rural Rajasthan. Chetan Ram Godara, who founded this group in his home district of Nokha (Bikaner), is a Civil Engineer by profession and has worked with Urmul Trust since 1986 and was trained by Sanjay Ghosh. Sanjay Ghosh made significant contributions through Urmul in Rajasthan, and he then got involved with similar efforts in Assam where he was killed a few years back.

Urmul Jyoti Sansathan (UJS) is a relatively young organization, which started its efforts in 1995.UJS is an offshoot of Urmul Trust.UJS' major thrust has been education since inception. UJS employs 25 full-time workers. Its main initiatives are following: