Chaudhary Ranbir Singh Hooda (26 November 1914-1 Febrauary 2009) a freedom fighter and a great man was born on November 26, 1914 , One of the gems of Haryana. He had been the President of Freedom Fighters Association of India. He played a significant part during the freedom struggle. He was elected twice to the Lok Sabha and once to the Rajya Sabha. He also remained a Minister in the Punjab Government before Haryana was carved out and was the HPCC President in the early 1980s.

His another notable contribution included the role he played in development of Bhakra Nangal Power project as the then Irrigation Minister of joint Punjab. His son, Ch. Bhupinder Singh Hooda, is the current Chief Minister of Haryana and his grandson, Sri Deepender Hooda is a Member of Parliament from Rohtak.

Ranbir Singh got his primary education at his village school and later at the Gurukul Bhainswal Kalan near Gohana Sonipat run by the great Arya Samaj activist and social reformer, Bhakt Phool Singh.

Ranbir Singh joined the Gandhian movement in 1930s to contribute towards India's freedom struggle. He graduated from Delhi's Ramjas College in 1937. He was first arrested in 1941 for participating in a Satyagraha movement. He was put behind bars several times during India's freedom struggle. In all, he spent three and a half years in rigorous imprisonment and was under house arrest for two years. He went to different jails in Rohtak, Ambala, Hisar, Ferozepur, Lahore (Borstal), Lahore (Central), Multan and Sialkot.

He was closely associated with Mahatma Gandhi, during the latter's visits to Rohtak and nearby districts of Punjab.

The people elected him on the ticket of Indian National Congress to the Constituent Assembly in July 1947, largely owing to his contribution to the freedom movement. He actively contributed in the framing of the Indian Constitution and voiced the concerns of workers and peasants.

In 1962, he was elected to the Punjab Assembly. He was inducted into the Council of ministers and held the portfolios of Power and irrigation. He made substantial contribution in the making of the Bhakra Dam.

On the formation of Haryana as a new state on November 1, 1966, he shifted to his political base to Haryana and became a Minister. He won the Kiloi Assembly seat, [at present represented by his son, B. S. Hooda], in a by-election in 1968.

He was elected to the Rajya Sabha in 1972 and was behind the introduction of the pension for former MPs.

The last surviving member of the Constituent Assembly of India, Chaudhary Ranbir Singh, died at his residence in Rohtak town of Haryana on Sunday, 1 February 2009 after a nearly two-month long illness.

A Gandhian, Ranbir Singh was known for his participation in India's freedom struggle and later as a parliamentarian and administrator. 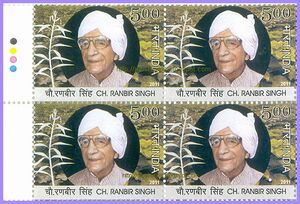 Paying tributes to Ranbir Singh, Gandhi said his decision to retire from active politics at the age of 64 years in order to dedicate his life to social work was significant.

Kapil Sibal said the Bhakra Dam project that ushered in the green revolution, was completed when Ranbir Singh was Irrigation and Power Minister of Punjab. The president of the All- India Freedom Fighters Association, Capt Ranjit Singh, appreciated the decision of the Department of Posts to release a commemorative stamp on Ranbir Singh. The function was attended by in charge of Haryana Affairs Oscar Fernandes, Union Minister of State for Communication Sachin Pilot, Union Minister of State Mahadev Singh Khandela, Delhi Assembly Speaker Yoganand Shastri and HPCC president Phool Chand Mullana.

On the occasion, UPA chairperson Sonia Gandhi called upon the people to introspect that what ideals they were setting for the future generations and added that power and wealth were not everything.

Sonia said that while remembering our freedom fighters, we must keep in mind that had they indulged in personal gains and greed, they would have not been able to do anything for the freedom of the country.

She described the farmer as the soul of the village and the nation and said that we must discharge our duties with affection and also by becoming sensitive towards them. She added that Chaudhary Ranbir Singh was 64 when he quit active politics and dedicated his life for the service of the freedom fighters and social work.

On this occasion, Union Minister Kapil Sibal said that the Department of Communication was proud of having released a commemorative postage stamp on Singh.

He said that Singh was a man of farsightedness, an eminent freedom fighter, a great patriot, able administrator and an ace Parliamentarian. Throughout his life, he followed the ideals of Mahatma Gandhi, who propagated the message that true Swaraj could be established only by serving the villages and their residents.

The short bio data is available at the following link: http://rajyasabha.nic.in/rsnew/pre_member/1952_2003/s.pdf

[Voting results at the Election: