See Deogarh for similarly named villages at other places. 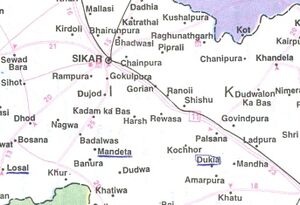 Deogarh (देवगढ़) is a village in Sikar tahsil of district Sikar in Rajasthan. This place was used for imprisonment of Shekhawati farmers movement by Rao Raja Sikar.

It is located on Sikar to Harsh Road near Gokulpura.