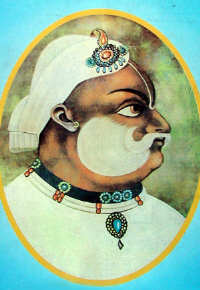 Rajasthan (राजस्थान) is the largest state of the Republic of India in terms of area. It borders Pakistan to the west, Gujarat to the southwest, Madhya Pradesh to the southeast, Uttar Pradesh and Haryana to the northeast and Punjab to the north. Rajasthan covers an area of 342,239 km².

Districts and Tahsils of Rajasthan 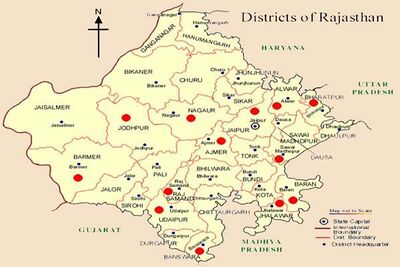 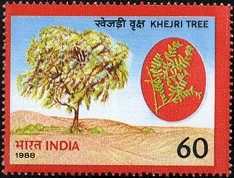 The state capital is Jaipur. Geographical features include the Thar Desert in western Rajasthan and the termination of the Ghaggar River. One of the world's oldest mountain ranges, the Aravalli Range, cradles the only hill station of Rajasthan, Mount Abu, and its world famous Dilwara Temples. Eastern Rajasthan has two national tiger reserves, Ranthambore and Sariska, as well as Keoladeo National Park near Bharatpur, famous for its bird life.

Rajasthan was earlier called Rajputana (state of Rajputs) after the ruling class of Rajputs. Rajput clans rose to prominence in the 6th century, establishing kingdoms in Rajasthan and across northern India. A number of Rajput states became tributaries to the Delhi Sultanate and Mughal Empire during those empires' peak of expansion. As these empires weakened, the Rajputs reasserted their independence. With the decline of the Mughal Empire in the 18th century, Rajputana become more and more independent. The Rajput kings concluded treaties with the British in the early 19th century, accepting British sovereignty. Ajmer became a province of British India, while the autonomous Rajput states and a few non-Rajput states (Tonk, Bharatpur, and Dholpur) were organized into the Rajputana Agency. Bharatpur and Dholpur were Jat states.

The Rajputana name of Rajasthan came into existence in the rule of Akbar but it did not get much publicity. Rajputana name come into use after Col James Tod wrote his book ‘Rajasthan’ at the time of British rule.

The exact Jat population in Rajasthan at present is not available as there is no caste wise census after 1931 in India. We can take 1931 Jat population as an indication of the proportion of it to the other castes. It can also be extrapolated on the ration of 2001 census and 1931 census, which can give approximate Jat population.

The population of jats in then princely states where they were in sizable proportion was as under:

Bisnoi jats mainly inhabited the areas of Bikaner, Jaipur, Bharatpur, Marwar, Kishangarh and Mewar and their combined population was 69873.

Thakur Deshraj has mentioned that the maximum density of Jats was in following tehsils in each princely state as under:

Rajputana name for Rajasthan prior to independence creates confusion as if Rajput population is in majority in this state. Thakur Deshraj has provided facts that total Jat population in Rajasthan in 1931 census was 11,42,025 where as Rajput population was 6,33,830. Thus Jats were about double the population of Rajputs. Shekhawati was part of Jaipur state, which had the highest Jat population of 3,13,609. In some of the princely states it was about 25 percent of total population, forming the single largest caste. [3] As per Imperial Gazeteer of India v-8, p-22, More than 44 per cent of the population in Bhadra tehsil in 1901, were Jats at that time. [4]

Historical traditions are that Jats, Bhils, Ahirs, Gujars, Meenas and some other tribes had a great contribution in building the state of Rajasthan along with Rajputs. All these tribes had to suffer great difficulties to protect their culture and the land. Millions of them martyred for this land. ‘The Hinduan Suraj’ title to Udaipur was due to Bhils. Jats had been fighting since beginning. Gujars had been exterminated in Bhinmal and Ajmer areas fighting with the invaders. Bhils ruled Kota and Bundi one time. Gujars were sardars in Alwar, Jodhpur and Ajmer areas. [5]

The truth is that purohits, Charans and Court poets out of greed for money and land gave prominence to Rajputs. Later James Tod wrote annals after taking bribe from Maharaja Udaipur and Maharaja Jodhpur of the Rajputana state. He was biased towards these states and Rajputs. The earlier contributions of warriors and protectors of the land Jats, Bhils, Gujars and Meenas were neglected and lost in the history. [6]

Jats lived in the Thar Desert since ancient times according to the puranic sources. They were also settled in Sindh and Punjab who migrated to the desert area of Rajasthan from time to time. The Author of the book ‘India of the dark ages’ writes that Jat republics were present in Rajasthan. Rule of Yaudheyas in desert area and naga Jats in Nagaur has been mentioned. [7] These republics were there till the rule of Harshavardhana. After the fall Harsha in 647 AD, the Jat republics weakened due to invasions by Mugals, Turks, Muslims and Yavanas. In the sixth and seventh century when new Agnikula clan of Rajputas was created in mount Abu, many of the Jat clans merged in them. Rajput sangha was formed from Gujar clans also. The Jat clans who joined Rajput sangha were termed Rajputs. Jat clans who did not leave the Vedic tradition of widow marriage remained in Jat sangha. Later during Muslim rule, to avoid the excesses by Mugals some of these Rajputs started child marriages of girls and the widow marriages, these groups left Rajput sangha and joined again the Jats and Gurjars. According to the records of Bhats, the rule of Anangapal and Prithvi Raj Chauhan was on these Jat areas of Ajmer, Sambhar, Fulera, and Shekhawati and up to Delhi. After the fall of Prithvi Raj Chauhan, there was no alternative left for these clans except to join the Jat sangha. The large number of common clans amongst Rajputs, Jats and Gurjars indicates that intermixing of clans with these sanghas was a trend at that time. [8]

Jat MLAs from Rajasthan elected in 2013

Jat MLAs from Rajasthan elected in 2018 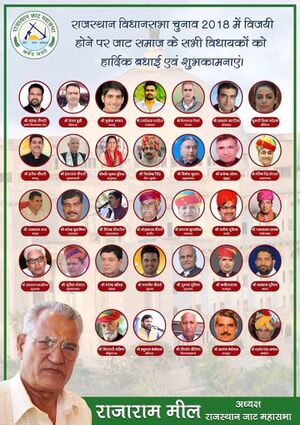 Jat MLAs from Rajasthan elected in 2018

List of MPs of Rajasthan in 15th Lok Sabha

Martyrs of Kargil war from Rajasthan

see complete list on Martyrs of Kargil war from Rajasthan

Folk deities and Goddesses of Rajasthan 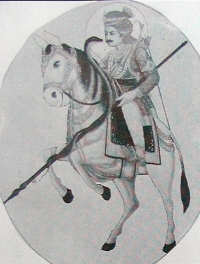