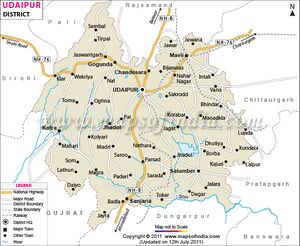 Udaipur (उदयपुर) is a city and district in Rajasthan.

Udaipur is located in the southernmost part of Rajasthan, near the Gujarat border. It is surrounded by Aravali Range, which separates it from Thar Desert. It is around 655 km from Delhi and approximately 800 km from Mumbai, placed almost in the middle of two major Indian metro cities. Besides, connectivity with Gujarat ports provide Udaipur a strategic geographical advantage. Udaipur is well connected with nearby cities and states by means of road, rail and air transportation facilities. Udaipur is located at 24.525049°N 73.677116°E. 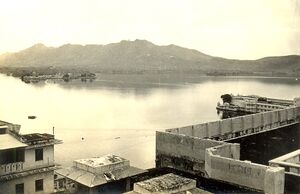 It was the historic capital of the kingdom of Mewar. It was founded in 1559 by Maharana Udai Singh II of the Sisodia clan of Rajput,[1] when he shifted his capital from the city of Chittorgarh to Udaipur after Chittorgarh was besieged by Akbar. It remained as the capital city till 1818 when it became a British princely state,[2] and thereafter the Mewar province became a part of Rajasthan when India gained independence in 1947.[3]

Pre-Historic Era: The Ahar River bank was inhabited by men in about 2000 B.C. There are footprints of two different civilizations, which provides claims about earliest inhabitants of the Ahar culture: the Bhil/Bheels, the indigenous tribes originated at this place, and are still residing in the area in large numbers.

The Establishment of Udaipur as a city: Udaipur was founded in 1559,[4] by Maharana Udai Singh II[5] in the fertile circular Girwa Valley to the southwest of Nagda, on the Banas River. The city was established as the new capital of the Mewar kingdom. This area already had a thriving trading town, Ayad, which had served as capital of Mewar in the 10th through 12th centuries.[6] The Girwa region was thus already well known to Chittaud rulers who moved to it whenever the vulnerable tableland Chittaurgarh was threatened with enemy attacks. Maharana Udai Singh II, in the wake of 16th century emergence of artillery warfare, decided during his exile at Kumbhalgarh to move his capital to a more secure location. Ayad was flood-prone, hence he chose the ridge east of Pichola Lake to start his new capital city, where he came upon a hermit while hunting in the foothills of the Aravalli Range. The hermit blessed the king and guided him to build a palace on the spot, assuring him it would be well protected. Udai Singh II consequently established a residence on the site. In November 1567, the Mughal emperor Akbar laid siege to the venerated fort of Chittor. To protect Udaipur from External attacks, Maharana Udai Singh built a six kilometre long city wall, with seven gates,[7] namely Surajpole, Chandpole, Udiapole, Hathipole, Ambapole, Brahmpole and so on. The area within these walls and gates is still known as the old city or the walled city.

As the Mughal empire weakened, the Sisodia rulers, reasserted their independence and recaptured most of Mewar except for Chittor. Udaipur remained the capital of the state, which became a princely state of British India in 1818. Being a mountainous region and unsuitable for heavily armoured Mughal horses, Udaipur remained safe from Mughal influence despite much pressure.

The Udaipur State, also known as Mewar State,[8] was an independent state in northwestern India prior to the formation of the Indian Republic.

State formation: Mewar was founded by Bappa Rawal, formerly a chieftain of the Mori king of Chittor, who acquired control of Chittor in c.728.[9] Nagda was the first capital of Mewar and continued to be so until c. 948 when the ruler Allat moved the capital from Nagda, Rajasthan to Ahar.[10]

Maratha influence: The Marathas made the first successful incursion into Mewar territory in 1725 and, subsequently, continued to exert increasing influence not only on Mewar but also surrounding states of Dungarpur, Banswara, and Bundi. To counter the Marathas, Maharana Jagat Singh of Mewar convened a conference of Rajput rulers in Hurda in 1734, but no agreement materialised. Maratha power continued to grow, with the Marathas regularly extracting hefty tributes from Mewar over the remaining part of the century. [12]

Mewar in the British Raj: By 1818, the armies of Holkar, Scindia, and Amir Khan had plundered Mewar, pauperising its ruler and people. As early as 1805, Maharana Bhim Singh of Mewar approached the British for assistance but the Treaty of 1803 with Scindia prevented the British from entertaining the request. But by 1817, the British too were anxious to have alliances with Rajput rulers and the Treaty of Friendship, Alliances and Unity was concluded between Mewar and East India Company (on behalf of Britain) on 13 January 1818.[13]

Under the treaty, the British Government agreed to protect the territory of Mewar, in return for which Mewar acknowledged British supremacy and agreed to abstain from political associations with other states and to pay one-fourth of its revenues as tribute for 5 years, and three-eight in perpetuity.[14] A constitution for Udaipur State was adopted on May 23, 1947.[15] The last ruler of Udaipur State signed the accession to Independent India on 7 April 1949.[16]

Maharanas of Mewar: Until 1303, the rulers of Mewar were called Maharawals. Upon the death of Maharawal Ratan Singh during the sack of Chittorgarh by Allauddin Khilji 1303, Hamir became the ruler of Mewar and styled himself as 'Maharana', which is what its rulers were called until dissolution of the state in 1949.[17]

List of Maharanas of Mewar
Retrieved from "http://www.jatland.com/w/index.php?title=Udaipur&oldid=458153"
Categories: