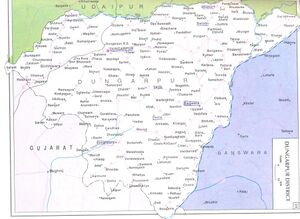 Dungarpur (डूंगरपुर) is a city and district in the southernmost part of Rajasthan. The rail line between Udaipur and Himatnagar in Gujarat runs through the town, shortest distance to the National Highway 8 from Dungapur town is 20 km. The town of Dungarpur is named after Dungaria, an independent Bhil chieftain who was assassinated by Rawal Bir Singh.[1] Dungarpur was expanded in 1282 AD by Rawal Veer Singh Dev. Rawal Veer Singh Deo initiated the construction of this palace in Vikram Samvat (Hindu Calender) in 1939 on Kartik Shukla Ekadashi. After realizing the importance of this palace, his son Rawal Bhuchand transferred the capital of Dungarpur State to this palace. Since then, this palace became the centre of all the activities of Dungarpur State. The construction of this palace could only be completed in eighteenth century after laying the foundation stone in thirteenth century.

But between 1183-84 Chalukya king of Gujrat Bhimdev II removed Samant Singh from Vagad and made Amritpal Dev the King of Vagad. Amritpal Dev belonged to the Bhartrapatta branch of Guhil dynasty.

Between 1209-1218 Jayat Singh somehow managed to regain control of some parts of Vagad lost by his father Samant Singh and then between 1218-1248 Sinhad Dev, son of Jayat Singh won the Capital Baroda by his own bravery. His son Jai Singh added Arthuna during 1248-1251.

Ideal time for tourists to visit Dungarpur is between July and March.

Dungarpur is also the name of a village in tahsil and district Faridabad of Haryana.