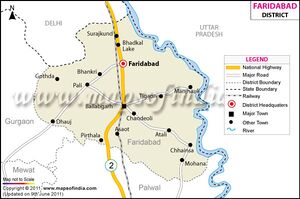 Faridabad(Hindi: फरीदाबाद) is a city and a municipal corporation in Faridabad district in the state of Haryana, India. It is a major industrial city and population centre.

The city was founded in 1607 by Shaikh Farid, treasurer of Jahangir, with the object of protecting the highway which passed through the town. Shaikh Farid built a fort, a tank and a mosque which are now in ruins. Later, it became the headquarters of a pargana which was held in jagir by the Ballabhgarh ruler. Faridabad became the 12th district of in Haryana on 15th August, 1979.

The district headquarter is situated in Faridabad city. Other smaller towns are Ballabhgarh, Palwal and Hodal. The total area of Faridabad district is 2760 sq kms and its population is 14,77,000. Faridabad city is the most populated and most industrialized in whole of Haryana.

The city is said to have been founded in 1607 AD. It is named after Sheikh Farid, Jahangir's treasurer, or Baba Farid, a Sufi saint.

One of the best place to visit is the Badhkal Lake, about 32 km from Delhi. This man-made lake is surrounded by Aravali Hills and there is a resort of Haryana Tourism to cater to the people visiting it.

The Surajkund Crafts Mela is held every year from Feb 1 to Feb 15. Surajkund is just 8 km from south Delhi on the Delhi-Agra national highway. 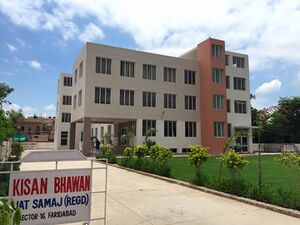 Faridabad is said to have been founded in 1607 A.D. by Sheikh Farid, Treasurer of Jahangir, with the object or protecting the high road which passes through the town. He built a fort, tank, and mosque. Later it was the headquarters of a paraganah, which was held in jagir by the Raja of Ballabgarh, till the jagir wall resumed after the mutiny.

It is a small town some 16 miles south of Delhi of at present 4,500 inhabitants, though half a century ago the population amounted to as much as 8,000 souls. Two branch roads from the Delhi-Muttra road form a loop passing through the main bazar of the town. Close to the main road about 1½ mile off is a station on the Agra-Delhi Chord Railway. The main bazar is a fairly broad street passing through brick houses: about half way along it another bazar street branches off, leading past the post office, thana, school, rest-house and dispensary, and out of the town on to the canal.

Opposite to this street on the west of the town is the large mosque with a picturesque tank constructed by Shaikh Farid the founder. Close to the hospital a town hall has been recently built for the benefit, of the municipal committee whose meeting‘s are held .there : near the canal is an Irrigation Department rest-house. Barring the main bazar most of the houses are built of dried mud and are decidedly mean in appearance. The town is not a great trading centre nowadays, as the communications with Delhi are so good that the zamindars deal direct with the city merchants. The income of the Municipal Committee is about Ra. 6,500 per Interest-Year, the income tax assessment is now about Rs. 300, and the agricultural land of the mauza, which is famous for its gardens, mendhi cultivation and rich crops, is assessed to Rs. 3,945 land revenue. Statistics of population, taxes, and trade show that the town is receding in importance from the position which it used to hold.