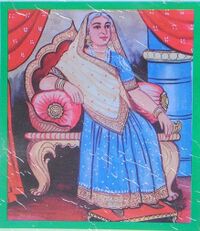 Maharani Kishori (महारानी किशोरी, भरतपुर) was the wife of Jat Maharaja Suraj Mal of Bharatpur in Rajasthan, India. She belonged to Hodal, a town situated in Faridabad district of Haryana on National Highway No.2, near Mathura and Bharatpur. Maharani Kishori was the daughter of Chaudhary Kashi Ram Sorot. Swami Omanand had very close relations with her family and obtained much historical material for museum.

The main contribution of Maharani Kishori of historical importance are as follow: 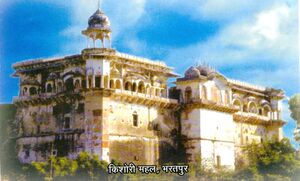 Kishori Devi was the daughter of one Chaudhary Kashi Ram Sorot. Legend has is that one day Maharaja Suraj Mal was passing Hodal on his stately elephant when he noticed an unusual incident. An agitated bull was frightening everyone and roaming angrily when Kishori Devi, along with her friends, was returning from a well with pitchers on her head. She put her toe on the loose bridle and restrained the bull. Kishori was a brave, stout and beautiful young maiden. Suraj Mal was greatly impressed and after some time sent his purohit with the marriage proposal. Her father is said to have agreed to the relationship but wished that his status be at par with that of the reputed Raja. Upon hearing this, Maharaja Suraj Mal granted him the title of Chaudhary with the authority to collect revenue from the parganah of Hodal. The marriage was solemnized sometime around 1730.

According to the poet Sudan, Maharaja Suraj Mal married Maharani Kishori on 21 March 1750 (falgun sudi pandrah). Chaudhary Kashi Ram Sorot had two more sons in addition to Kishori who were Buj Lal and Guman Singh. Maharaja Suraj Mal appointed Kashi Ram as manager of village Tawadu (Parganah Nooh) and this way through the marriage with Maharani Kishori he strengthened his position in Mewat.

A patron to the Bharatpur State 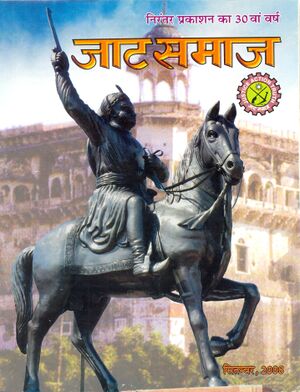 The Marathas had attacked Kumher Fort on 20 January 1754 AD. They besieged the Kumher Fort till 18 May 1754. The war continued for about four months. During the war, Khande Rao Holkar, son of Malhar Rao, was one day inspecting his army in an open palanquin, when he was fired from inside the fort and a cannonball hit him and he was killed. Malhar Rao got very angry on the death of his only son and wanted to take revenge and vowed that he would cut off the head of Maharaja Suraj Mal and throw the soil of fort into Yamuna after destroying it. Marathas increased the pressure and Suraj Mal defended peacefully. Suraj Mal was alone and no other ruler was ready to help him. At this moment, Maharaja Suraj Mal counseled Maharani Kishori, who assured him not to worry and started the diplomatic efforts. She contacted Diwan Roop Ram Katara. She knew that there is a strong enmity between Malhar Rao Holkar and Jayappa Sindhia and that Jayappa Sindhia was very firm in determinations. She advised Maharaja Suraj Mal to take advantage of mutual differences within Marathas. Diwan Roop Ram Katara was a friend of Jayappa Sindhia. She requested Diwan Roop Ram Katara to take letter of Maharaja Suraj Mal with a proposal of a treaty. Jayappa Sindhia assured to assist and contacted Raghunath Rao who, in turn, advised Holkar for a treaty with Suraj Mal. Malhar Rao Holkar assessed the situation and consented for treaty due to fear of isolation and severe war. This led to a treaty between both rulers on 18 May 1754. This treaty proved very beneficial for Maharaja Suraj Mal.

K. R. Qanungo[1] mentions....Though equally indifferent to death the Jatni, bred in a freer atmosphere, with a wider outlook of the world and a deeper penetration of human character than the Rajput lady, proved to be more optimistic and resourceful. Hansia (the 'smiling one', wife of Suraj Mal) roused the droping spirits of her husband, telling him to trust her and banish despair from his mind. She had heard of Jayaji Appa Sindhia, as a man, generous, straightforward, and chivalrous, who could be trusted more than any other Maratha chief; the mutual jealousy among the Maratha leaders, and their accessibility to bribe were also not unknown to her. In order to create division in the enemy's camp, she one night sent Tejram Katari, son of Rupram, with a letter from Suraj Mal and his turban to Jayaji Sindhia, to implore his protection and friendship by an exchange of head-dress. Jayaji made a noble response, accepted the pledge of Suraj Mal and sent him his own turban in exchange with an encouraging letter, and a leaf of the sacred Bel tree, taken from the offerings to his patron deity (Bel Bhandar), as the most solemn proof of his sincerity. The news of the incident leaked out and Holkar became despondent.

The Pushkar bath by Maharani Kishori

Maharani Kishori, wife of Maharaja Suraj Mal, who had adopted Jawahar Singh, was adept at political intrigues. She was pained to see that Maharaja Jawahar Singh was not adopting a favourable policy towards the members of the family and the nobles. She knew that only keeping him engaged in warfare could control him. She also knew that the Rajputs could never tolerate this abrupt rise of Jat rule and would always resist the latter's efforts to gain power. The solution for both the problems lay in war.

Maharani Kishori expressed her desire to her brave son that she wanted to go for a sacred bath at Pushkar. Jawahar Singh pointed out that Pushkar was situated in the territory of his eternal and deadly foe, Raja Madho Singh, who would not tolerate her arrival at Pushkar with a large retinue, and advised her that if at all she were keen to go for Pushkar bath, she would go with only a few followers and Rupa Ram, the Purohit.

The Maharani retorted that she was the mother of Maharaja Jawahar Singh, and the Maharani of Maharaja Suraj Mal and taking a bath like Marwari women would hurt her pride, and that she would like to take her bath along with the Rajput Ranis there.

She would also like to give away alms surpassing the Rajput Ranis. She said, she did not understand why the Jats should be afraid of the Rajputs any longer. Jawahar Singh knew well that this would lead to warfare and bloodshed.

Jawahar Singh marched to Pushkar with 60,000 cavalry, 1 Lakh infantry and 200 guns. With fluttering banners and beating drums, they entered Jaipur territory and set up an impressive camp in the Sandy plains of Pushkar.

Maharani Kishori was weighed in gold, which was given in charity. The other Ranis who had come on this occasion, felt humiliated because they were not in a position to match the charity of Maharani Kishori. The Rajput vanity was hurt.

When Marathas were defeated in the Third Battle of Panipat and a total of hundred thousand Maratha survivors while returning to south, reached Suraj Mal’s territory sans arms, sans clothes and sans food, Maharani Kishori along with Maharaja Suraj Mal received them with tender warmth and hospitality, giving free rations to every Maratha soldier or camp follower. The wounded were taken care of till they were fit to travel. This is an example of her strong love for mankind.

Saves the House of Bharatpur from Extinction

In July 1778, Mirza Najaf Khan was constrained to make peace with the Rao Raja, recognizing his title to Alwar and other territories conquered from the Jats. He sent back Hamdani against Ranjit Singh and himself started for Agra. In September 1778 he appeared before Kumher with a big army to finish the affairs of Jats.[2]

The siege of Kumher was prosecuted with great vigour, but the garrison in hope of the arrival of the Emperor put up a stiff resistance. Mirza Najaf Khan grew impatient as the siege seemed to be dragging on to an interminable length. The Amir-ul-umra out of the consideration of policy and general good sent a letter full of admonitions... reminding Ranjit Singh that there was yet time to secure pardon through submission and to atone for his past error by loyal service, without dragging several thousand men into destruction. This Advice failed to find any place in Ranjit Singh's heart - he remained as haughty and obstinate as before. [3] The besieging army redoubled their efforts and soon rendered the fort untenable. In their hour of supreme peril, they remembered the old Maharani Kishori, who had outlived the glory of house of Bharatpur, and been pining in neglect and retirement after the death of Maharaja Jawahar Singh. The well-wishers of Maharaja Ranjit Singh advised him to send the old Maharani Kishori to the Mughal camp, because she enjoyed the respect and good-will of the high officers of Amir-ul-umra, and might possibly by her intercession procure pardon for his past offices. But Ranjit Singh hesitated to act upon their advice lest the Mirza should compel him to surrender unconditionally by detaining her in Mughal camp. One night he escaped with a few friends, leaving Kumher to its fate. Next morning the Muslim troops scaled the walls of the fort and overpowered the defenders. Maharani Kishori fell a prisoner into their hands and was taken with all honour to the camp of Nawab. In obedience to his orders, the officers of his government erected lofty and secluded tents for her residence and expert servants were appointed to wait upon her, so that after a few days her grief might subdue. [4][5]

It was not with the suspicious and timid steps of a prisoner that she went to meet the conqueror when summoned by him, but rather in the hope and confidence of a mother in distress who goes to see her foster child. On reaching the presence of Nawab, she like an affectionate nurse, walked round the person of Amir-ul-umra, and with sincere heart took away [on her own shoulders] all his evils.[6] With tearful eyes, she narrated the pitful tale of her misery. When Nawab Amir-ul-umra learnt the distress of her heart overflowed with kindness and very graciously set her up as his own mother. He gave her the fort of Kumher for her residence and the mahals around it for her support. To please her, he forgave the guilt of Ranjit Singh and left him the fort of Bharatpur with territories worth seven lakhs of Rupees as jagir. His magnanimity succeeded where the barbarious ferocity of Abdali had failed. [7]

Back to The Rulers/Jat Ranis