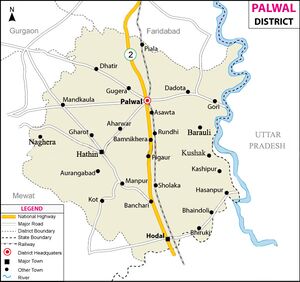 Location of Hodal in Palwal District

Hodal (होडल) is a town and tahsil in Palwal district of Haryana state near the border of Uttar Pradesh in India. It is situated at a distance of 88 km from Delhi and 105 km from Agra on NH-2. The town is not too far away from Mathura and Bharatpur, with which it has been traditionally associated.

It was occupied by the Sorot Jats around 1500 A.D. It is said that three brothers of Sorot Jat clan had arrived in this area before from Manak Jartauli village in U.P. The eldest among them was Ojhoo who settled at Hodal , the second settled at Banchari, north of Hodal, and the youngest settled at Sondh, towards the northwest of Hodal.

Hodal is known for three reasons: firstly, Maharani Kishori, the first wife of Jat Maharaja Suraj Mal of Bharatpur, belonged to this place; secondly, it is the head village of a group of 24 villages inhabited by the Sorot Jat clan; and thirdly, an ancient temple dedicated to Lord Krishna is situated here.

Back to Places /Jat Villages