Location of Mavli in Udaipur District‎

Mavli (मावली) is a town and tahsil in in Udaipur District in Rajasthan. 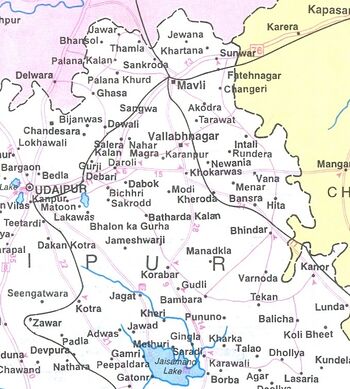 James Tod[1] visited this place and gives us the information:

Maowlee, 26th, October, 1820. seven and a-half miles. — As usual, all was barren between Sunwar and Maowlee ; though at each are the traces of reviving industry. This was formerly a considerable town, and rated in the books at seven thousand rupees' annual rent ; but now it yields not seven hundred. Its population consists of about eighty families of all classes, half of which nave "been recalled from their long exile in Malwa and Candeish, and have already given a new aspect to Maowlee in its sugar-canes. Her highness' steward, however, is not

[p.629]: one of the faithful. There is a very fine bawari, or reservoir, of coarse marble, constructed by Baeji Raj, ' the royal mother' of the present Rana and his sister, in whose appanage it is. — An inscription, dated S. 1737, recorded an ordinance in favour of the Jains, that " the oil-mill of Maowlee should not work on the four rainy months ;" in order to lessen the destruction of animal life.