Location of Kapasan in Chittorgarh District

Kapasan is a town and tahsil in Chittorgarh district in Rajasthan. 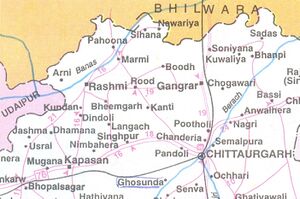 Location of Places around Kapasan

Archaeologists are enthralled at the discovery of a multi-cultural site near Moola Mata temple at Kapasan town in Chittorgarh. Of the remains found here in three different layers, one beneath the other, the oldest one identified dates back to 5,000-year-old Ahar culture while the other two are believed to fall somewhere between around 2,500 and 1,000 years, respectively. This is the 116th site found so far of the Ahar civilization whose remains is believed to be sprawled in a vast area across Rajasthan, Madhya Pradesh and Gujarat.

Archaeologists have found typical white painted black and red ware pottery pieces which are known as the peculiar and distinct feature of the Ahar civilization. The chemical analysis of the discovered material is expected to bring important revelations on how the culture flourished in different periods, experts claim.

The discovery came when an official of the Nagar Palika happened to visit the temple recently. He was informed by the residents of remains seen on the mound thus suggesting a possibility of some ancient civilization unearthed. Taking the clue the officer ordered excavation at the site few days back and what came out stunned everyone. Pillars, pieces of earthen pots, brick walls, broken pieces of stone structures were discovered from the site.

"It is a huge mound which roughly measures 250 m north-south and 150 m east-west. Remains of Ahar culture are superimposed by a very thick cultural deposit of Historic and Medieval phase," informed Prof Jeevan Singh Kharakwal, director, Sahitya Sansthan of Rajasthan Vidyapeeth University. The total cultural deposit is about 10m thick.

"We visited the site since a few members of a medieval temple got exposed while digging for soil to level the ground. The local villagers are making a shrine of Moola Mata on top of this mound. Our close examination thus revealed that it is a multicultural site.There are a few well-known Ahar culture sites such as Gilund, Umand, Rawalia in this area located about 20, 8 and 11 km respectively, from Moola Mata," Kharakwal said.

The exploration was carried out jointly by a team of Sahitya Sansthan, Rajasthan Vidyapeeth, Udaipur and Ahar museum, Udaipur.