Panwar originated from The Mahabharata Tribe - Pachar or Pachehra.Other historians consider Paramaras to be the ancestors of Panwar. At the Time of Alexander’s raid into India, he faught against the Puru tribe. The leader of Puru tribe was Porus. There is a reference of “ Porus’ in the Greek accounts. The name of clan of Porus was Puru, and now Puru is found amoung the Jats as panwar, Puru, Pawar, Parmar, Paur, Por, Paurava or Pauria, or Paurya as a gotra name.The kings of Malwa or Ujain who reigned at Dhar and flourished from the ninth to the twelfth centuries were of the Panwar clan.It is stated in mediaval history that the Panwar ruled over a large area consisting of nine castles including the ‘Region of death’, the name given to the great dessert of Thar which extended from Sind to the Aravalli mountains and from the great salt lakes to the skirting of Garah. These castles were Abu, Nundore, Umarkot, Arore, and Lodorva etc. Mr. Crooke states that the expulsion of the Panwars from Ujjain under their leader Mitra Sen is ascribed to the attack of the Muhamaddans under Shahab-ud-din Ghori about AD 1190. After this they spread to Madhya Pradesh and Maharashtra, where they are known as Pawar (Sivaji was a Puar)and so is the Nimbhalkar tribe.

Bhim Singh Dahiya[10] writes....Some authorities have given an opinion that the name Porus has not been derived from Paurava and cannot be equated with this ancient name. "The guess that Porus might be Paurava is not very convincing".138 "Porus (is) not to be identified with Paurava but with a derivative of Pura of Ganapatha of Panini.139 Thus it is clear that Porus cannot be identified with Paurava or any ancient Indian name. Jayaswal's suggestion that it is related to Pura of Ganapatha of Panini seems to be correct because even today this clan of the Jats is known as Poriya or Phor, the later being the form given by Muslim historians. It seems that Puriya and Phor/Por are one and the same clan, though existing today under both the forms, among the Jats.

Ram Swarup Joon[11] writes about Parihar, Prathihar, and Panwar: According to many writers they belong to the Gujar dynasty and their ancestors are said to have been associated with the Mauryan Jatti clan .

At the time of becoming Rajputs their capitals were in Bhinmal and Tirah.

According to the descriptions provided by Bal Clans, Prathihara and Maha Prathihara were titles only.

They may or may not be Gujars, but they are Chandravanshi and are descendants, of Yayati.

After the Agnikula ceremony they decided to forget their original roots in order to rise in status.

Their origin was at Dharanagari. Sujan Singh was their chieftain. Sujan Singh won the places Udiya, Amber, Ujjain, Averi, Abugarh and Sanganeri, which were in the territory of Rajarao. He defeated the five states so they were called Pachahara. Sujan Singh progressed further and also won Hindon, Bayana and Gwalior forts. Sujan Singh established villages Dhahrooa, Kanarai. He also defeated Kalars who had great nuisance and had dominance in Brijbhumi.[12]

The Kannauja descendant had five sons namely Vijay Singh, Pratap Singh, Roop Singh, Dalo Singh and Bhabal Singh along with two daughters Darbo and Jasso. They constructed a Mata temple at Aayara Kheda village. 360 villages of Panwar Jats have spread from Aayara Kheda. These villages are located in the lower bank of Yamuna River. The rest of villages were established beyond Ganges River. The chieftain Sujan Singh visited the Ashram of Nimbaditya Rishi. This place was full of Neem and other trees; He established this place as Nimgaon after Nimbaditya Rishi. [13]

Panwar rulers in Omarkot - Umerkot or Omarkot (Urdu: عمرکوٹ) is town in the province of Sindh, Pakistan. It is also referred to as Amar Kot as per old histories, "Amar Kot Itehas" by Tej Singh Solanki. Once, it has been Capital of Greater Sindh Province, including some parts of present Rajasthan state of India. According to Thakur Deshraj, Panwar clan Jats were rulers here prior to Mughal ruler Humayun. Jame Tod tells it to be a Rajput state confusing Panwar with Rajputs, but it was denied by Cunningham, who wrote it to be a Panwar Jat state referring to the author of 'Humayun Nama'. Panwar Jats are residing in Delhi-Shahpurjat, Bersarai, Muzzafarnagar, Bagpat, Garwal, Haryana - Indri Sonipat.

1) The Great King Vikramaditya also known as Vikramajeet (the sun of power) was a dynamic divine personality and a legendary king of Ujjain (India) who ruled from 380 until 413 C.E. This period is termed as Golden Age of India. He extended his empire through war conquering about twenty-one kingdoms in and outside India. The greatest of his military achievements was his advance to the Arabian Sea and subjugation of the peninsula of Saurashtra (Kathiawar). His court was made even more illustrious by the fact that it was graced by 'Nauratna' (nine jewels).

2) King Bhoj (Bhojraj) was a polymath and philosopher king of medieval India who ruled the kingdom of Malwa from 1010 to 1060 C.E. Under his rule, Malwa and its capital Dhar became one of the chief intellectual centres of India. He rebuilt the temple of Somnath after it was sacked by Mahmud Ghaznavi.

3) Raja Jagdev Panwar became the ruler of Malwa after his father King Udayaditya, but he gave the rule to his brother owing to family-dispute and settled his kingdom at Jarg. He slew a demon who used to eat a human-being daily in a fort near Depalpur (Okara) and Raja Kankhar bestowed him half kingdom and married his daughter with him. He struck off his own head on the demand of a witch-wife of the court-bard of Raja Jai Singh but was miraculously restored to life. He founded Akhnoor State, ruled by Panwar Dynasty of his descendants for 600 years.

Mr. Low comments that 'Panwars' are a handsome race with high foreheads and grey eyes. They are not deficient in courage and are often known to fight till last man; always preferring a glorious death before a life of 'dishonour'.

Mr. H.A. Rose inscribes that 'Panwars' are a pleasant, intelligent and plucky race, not easily cast down by misfortune and always ready to attempt new enterprises in almost any direction.

Colonel James Tod writes that "Everywhere Panwars made their mark, so they lived in history".

The Uttarakhand cultural historian Dinesh Baluni states that the first Panwar king of Panwar dynasty was Kankpal who was crowned for Chandpur Gadhi in 888 AD. He states that the folk story of Jagdev is before Kanakpal.

Jagdev Panwar who founded Panwar dynasty in Akhnoor kingdom King Udayaditya (Vikramiditya clan) of Malwa, Dhar had two wives. The valerian Jagdev was son from Solankin queen. The other queen Baghelin did not want that Jagdev become crown prince and she arranged conspiracy. Jagdev and his wife had to leave the court. Jaisingh was the competent general of Udayditya.

Jagdev did deep mediation for Jagdamba (Mahakali). Goddess Kankali asked the head of Jagdev from his wife. The head of Jagdev was given to Kankali. Kankali took head to heaven and showed the sacrifice to devtas. Later, Kalinka joined head with Jagdev body made Jagdev live.

Later on due to dispute Jagdev migrated to Himalayan belt at Akhnoor, Jammu and Kashmir. Jagdev Panwar established his kingdom at Virat Nagri (2 -3 kilometers away from Akhnoor) in 1096 AD. Jagdev was devotee of Amba goddess and after the death of Jagdev, the name of Wrat Nagri was changed as Ambaraian.

Folklore sung by Bhats of Dhara Nagri. There is another saying that Jagdev Panwar cut his head for seven times and offered to goddess on Sunday 1095AD.The said Dhar folklore by Bhat says-

Jagdev Panwar told the story of court to his wife. The wife was worried as Jagdev Panwar was smaller king and smaller by wealth too. Jagdev told his wife that Panwar fellow would never be defeated in ‘dan’(donation) too.

There is deity conference and was attended by lord Shiva and goddess Parvati. In the deity conference, Narayan announced that who would offer he would be given Garhwal kingdom.

Goddess Kalika devi (Kankali) became responsible to find such person who would offer his own head. In the form of beggar Kalika went to Dhara Nagari where two brothers Jaidev and Jagdev lived.

Seeing the beggar Kalika, Jaidev went away for hunting as he was very miser. Second brother Jagdev invited Kalika for ‘dan’. Jagdev asked his wives about what they were offering to beggar. All queens except Chauhani queen became ready to offer food and money. Chauhani was ready to offer her head.

Chauhani queen became ready in male dress and stood before her husband Jagdev Panwar and told him that she would sacrifice her life. Jagdev Panwar became enthusiastic. Jagdev Panwar took his golden sword and cut his head.

Bhim Singh Dahiya[15] provides us list of Jat clans who were supporters of the Punwar when they gained political ascendancy. The following Jat clans supported the ascendant clan Punwar and became part of a political confederacy:[16]

Dr Atal Singh Khokhar says in his book “Jaton ki utpati evam vistar” [17]that the Banswara inscription of Parmara king Bhoja indicates that his ancestor Siyaka, Siyaka’s son Vakpatiraja, Vakpatiraja’s son Sindhuraja, his son Bhojdeo came from Kasala in east Sudan to Gagar river in Nigeria and from there to Dor in Israel where he became ruler. Bhoja settled his followers at Bataneaea Assyria province’s Damiscus, Dara’s area and made Dara his capital. From there he came to Maharashtra and conquered Konkan area. He had defeated raja Keshideo of Shilahar vansha with the help of Rajendra Chol. [18]

Dr Atal Singh Khokhar considers Panwar vansha of the Agnikula origin came from Azean sea. His ancestors were Mahamah Dhumji Domitius, in which Nero was the last Emperor, of Ahanobarbaraka Suryavansha. Dumji migrated from Dhan to south and founded rule, whose fifth son was Putraja, after the death of whom Aditya Panwar was nominated to the throne who was founder of Panwar vansha. The Panwar is developed from Puhar meaning fire. Puhari was a Kushan vansha of which Kujula Kadphises founded Kushan rule in India in 48 AD. This rule continued upto 248 AD. [19]. According to ‘Panwar Darpan’ prior to Vikramaditya was king Dharagiri who founded Dara (Dharagiri) near Damiscus who were Malav descends. [20] James Todd has written that Parmaras (Panwar) rulers of Arbud (Abu) were Jat (vansha). [21] 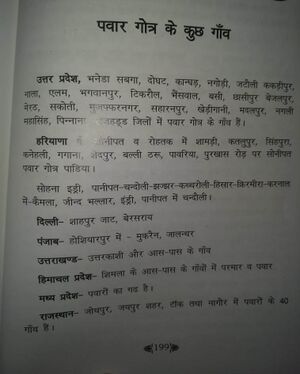 According to 1911 census the Panwar were the principal Muslim Jat clan in districts: 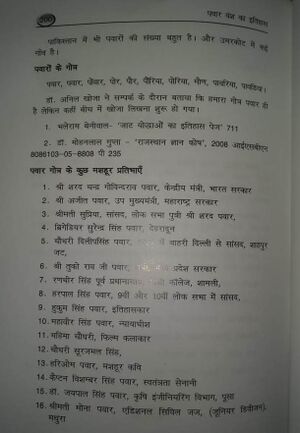 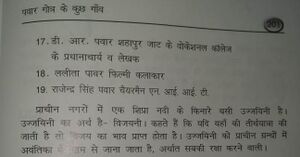