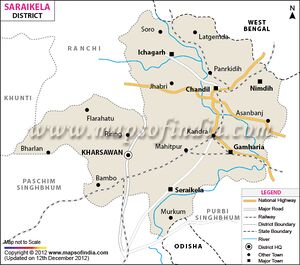 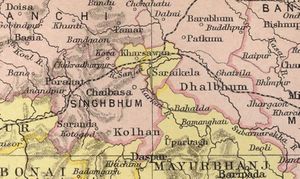 Kharswan (खरसावाँ) is a city and block in Saraikela Kharsawan district in the Jharkhand. It was also known as Amda before the 1920s.

Kharsawan or Kharsuan was founded around 1650. The rulers of Kharsawan are descended from Kunwar Bikram Singh of Porahat, the first ruler of neighbouring Seraikela State. His second son, Kunwar Padam Singh was the founder of Kharsawan.[1] It was one of the Oriya Princely states of India during the period of the British Raj, and was one of the nine Chhota Nagpur States under the authority of the governor of Bengal Presidency. It is now a part of Jharkhand state and one of its districts is named Seraikela Kharsawan district.

The Maharaja of Darbhanga used to visit this state to pay respects as the trade route to the east coast ran through the thick jungles of Singhbhum and safety was guaranteed only to those who were in the good books. The title of Raja was granted to Kharsawan rulers in 1902, beginning with Raja Ram Chandra Singh Deo. The state had a privy purse of 33,000 Rs. The present head of the royal family is Raja Pradeep Chandra Singh Deo.

Following Jat clans have similarity with places shown in bold in this tahsil/block. There is need to further research this correlation.