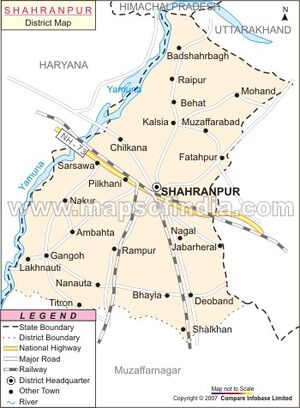 Saharanpur (सहारनपुर) is a city and district in Uttar Pradesh.

Saharanpur town is said to have been founded by a Jat of Saharan gotra, who killed a muslim chieftain of that area and took control of the area but later on he was defeated by the Mughals and escaped to Haryana and founded some villages there.

Saharanpur city, as an urban centre, was established during the Mughal period. It is located in fertile Doab region, that was forested till the medieval period, but in which human habitation can be traced as far back as 2000 B.C.[1]; remains of Indus Valley Civilization and Harappan culture have been found in it. Its original inhabitants (like Drawid, Kinner, Dasa and Dasyns) were subdued by the Aryans, the new settlers from Punjab region. Ancient invaders, who came from near and far through the ages (e.g. Nanda, Greek, Maurya, Shunga, Indo-Greek, Yaudheya, Kushana, Gupta, White Huns, Yasodharman, Vardhana, Maukhari, Rajputs-Pundir, Chandela, Muktapida, Ayuddhas, Gurjara-Pratihara, Palas etc.), have left legacies and their descendants in the region have first or last names that reflect these historical (and at times also mythological, e.g. Suryavanshi/Chandravanshi) kinships. On the basis of extant meager evidence, some sketchy accounts of these periods may be pieced together as 'history', for which reference may be made to the article on Saharanpur division. Historical accounts are better documented from the start of the medieval period that covers Ghaznavid, Kalachuri, Gahadvala, Chauhan, Ghorid/Turkic-Sultanate, Mogul dynasties etc.

After the early destabilising Central Asian Turkic invasions (1018–1033 A.D.) through the lands of present Saharanpur region – which has been a part of the westerly ‘highway’, since ancient times, to attack Delhi and the eastern lands beyond – this region was invaded and ruled by many others successively, most notable among them being Bhoja Paramara, Lakshmikarna Kalachuri, Chandra Dev Gahadvala and the Chauhans, who ruled it till the establishment of Delhi Sultanate] (1192–1526 A.D.).

During the reign of Shamsu’d-Din Iltutmish (1211–36), this region became a part of his Delhi Sultanate. At that time, most of it was covered with forests and marshlands, through which rivers - like the Saharanpur city’s ‘Paondhoi', 'Dhamola' and 'Ganda Nala’ (Kregi Nala) rivers – flowed ; the cli prone to producing malaria. Muhammad bin Tughluq, the Sultan of Delhi (1325–1351), undertook a campaign in the northern Doab to crush the rebellion of Shivalik kings in 1340, when according to local tradition he learned of the presence of a Sufi saint on the banks of the Paondhoi river. After visiting the sage, he ordered that henceforth this region would be known as 'Shah-Harunpur', after the Sufi Saint, Shah Harun Chishti [2] The simple but well-preserved tomb of this saint is situated in the oldest quarter of Saharanpur city, between Mali Gate/Bazar Dinanath and Halwai Hatta. By the end of fourteenth century, the power of Sultanate had declined and it was attacked by Emperor Timur of Central Asia. Timur had marched through Saharanpur region in 1399 to sack Delhi and people of the region fought his army unsuccessfully. A weakened Sultanate was conquered later on by the Central Asian Mughal king, Babur.

During the Mughal period, Akbar the Great (1542–1605) made Saharanpur a sarkar (administrative unit) under the Province of Delhi. He bestowed the Jagir of Saharanpur upon Saha Rana Veer Singh – a Jain nobleman in his court – who, according to one tradition, laid the foundation of the present city at the site of an army cantonment; the nearest settlements at that time were Shekhpura and Malhipur. Raja Rana Veer Singh’s Saharanpur was a walled city, with four gates: the Sarai Gate, the Mali Gate, the Buria Gate and the Lakhi Gate; Nakhasa Bazar, Shah Behlol, Rani Bazar and Lakhi Gate were inhabited localities in this walled city of Saharanpur. The ruins of Ranveer Singh’s fort can still be seen in the Chaudharian locality of Saharanpur. He also built a temple in Muhallah Chaundhariyan[3].

Mogul emperors, Akbar and later Shah Jehan (1592–1666), had bestowed on Sayyed families the Pargana of Sarwat; in 1633, one of them founded a city and named it as well as the region around it as Muzaffarnagar, in honour of his father, Sayyed Muzaffar Ali Khan. The Sayyeds ruled it till the 1739-invasion by Nadir Shah. After his departure, anarchy prevailed in the entire Doab and this region was ruled or ravaged in succession by Rajputs, Tyagis, Brahmins and Jats and was also plundered repeatedly by the Sikhs. Taking advantage of the anarchy, the Rohillas took control of the entire trans-Gangetic region.

Ahmad Shah Durrani, the Afghan ruler who arrived after Nadir Shah, conferred the territory of Saharanpur as Jagir on Rohilla Chief Najaf Khan, who assumed the title of Nawab Najeeb-ud-Daula and, in 1754, started living in Saharanpur. He made Gaunsgarh his capital and tried to strengthen his position against Maratha attacks by entering into a friendship with the Gujjar Chieftain Manohar Singh. In 1759 A.D., Najeeb-ud-Daula issued a Deed of Agreement handing over 550 villages to Manohar Singh who became the Raja of Landaura. Thus the Rohillas and the Gujjars now controlled Saharanpur en masse.

In 1757, Maratha army’s invasion of Saharanpur region resulted in loss of control of Najeeb-ud-Daula on his Jagir of Saharanpur for a short while - Raghunath Rao and Malharao Holkar occupied it then - but the Nawab regained control when Raghunath Rao left Saharanpur for Punjab campaign. The conflict between Rohillas and the Marathas went on and came to an end only on 18 December 1788 with the arrest of Ghulam Qadir, the grandson of Najeeb-ud-Daula, who was defeated by the Maratha general Mahadaji Scindia. The most significant contribution of Nawab Ghulam Qadir to Saharanpur city is the Nawab Ganj area and the Ahmedabadi fortress therein, which still stands in front of the Vijay Talkies.The death of Ghulam Qadir put an end to the Rohilla administration in Saharanpur and it became the northernmost district of the Maratha Empire. Ghani Bahadur Banda was appointed its first Maratha governor. Durst Maratha governor. During the Maratha Regime, the Bhuteshwar Temple and another temple - adjacent to the present ‘Company Garden’ - came into existence in Saharanpur city.

Marathas were ousted by the British East India Company, which occupied the region of Saharanpur in 1803; it also included the present Muzaffarnagar and Haridwar districts. Saharanpur passed firmly into the hands of British invaders in 1804, when they had eliminated the Marathas from the region.

Back to Uttar Pradesh