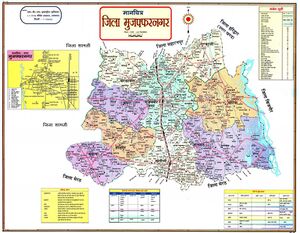 Muzaffarnagar (Hindi: मुज़फ़्फ़रनगर, Urdu: مظفر نگر) is a medium-sized city, headquarters of the Muzaffarnagar district, in the western part of the state of Uttar Pradesh in India. According to the 2001 census it has a metropolitan population of 331,403.

Tahsils in Muzaffarnagar district are:

The district is divided into 9 blocks, these are[1]:

Muzaffarnagar's early medieval history is obscure till the Indo-Mughal period. Timur's army had marched to Delhi through this region in 1399; its people fought it unsuccessfully. In Mughal Emperor Akbar's time, most of the Muzaffarnagar district region, called Sarwat then under the Mahal control of Taga / Tyagi brahmans of Sarvat village, belonged to the sarkar (circle) of Saharanpur. Akbar bestowed pargana of Sarwat on Sayyed Mahmud Khan Barha which remained with his descendants up to the 17th century. After killing Peer Khan Lodi styled as Khan Jahan lodi, Shahjahan bestowed title of deceased Peer Khan Lodhi and Pargana of Sarwat on Sayyed Muzaffar Khan Barha, whose son Munawwar Lashkar Khan Barha established the city and named it Muzaffarnagar in honour of his father, and Sarwat also became Muzaffarnagar.[2]

In pages of history and revenue records Sarvat was known as pargana which was given as Jagir to one of the chieftains named Saiyed Muzaffarkhan by emperor Shahjahan. He founded the city of Muzaffarnagar in 1633 with lands of Khera & Sujru. His project was completed by his son Munawar Lashkar Khan who in turn named the city after his father Muzaffarkhan.

But recent finding of archeological site at village Mandi (Tehsil Sadar) in west of river Kali takes the roots of district Muzaffarnagar to Harappan civilization. Hordes of gold ring like objects and other precious stones prove that the site was the part of mature Harappan culture and also important center of trade during ancient times. More excavations are being carried out by Archeological Survey of India and in near future better picture will emerge from these findings.

Proximity with Hastinapur and Kurukshetra indicates that this district was hub of activities during the Mahabharata era. With exceptions of few findings of Greeco-Roman coins, there is hardly any direct mention of the region for a long period of time. But with strategic location of Muzaffar Nagar, it can be safely presumed that there were a lot of political as well as economic activities here. Rajputs, Tagas And Brahmins dominated the area according to C.H.NEVILLE, I.C.S. in his compilation of Muzaffarnagar Gazetteer. Later Jats replaced the Tagas.

Persian literature has mention of the place during Timur's invasion of India. A large number of Hindus gathered at Bhokar Heri on the banks of river Ganga to resist his armies according to Timur. But unorganized Hindu force were defeated by him in year 1399.

Later on this district was adopted by the SAIYEDS of different clans. During Mughal period this area became a favorite resort of royal nobles of Mughal court and many of them obtained JAGIRS here.

The history of BARHA SAIYEDS is intimately connected with this district. But the derivation of word BARHA is very uncertain. The TIHANPURI SAIYEDS, JAGNERI SAIYEDS ,CHATTAURI family and the Kundliwal family were famous families of Muzaffarnagar. In later part of Mughal era famous SAIYED brothers HASAN and ABDULLA became KING MAKERS. The period of 1707 to 1720 was their prime time. But after fall of SAIYED brothers the political scenario changed and Muzaffarnagar was plundered by SIKHS and other adventurers. Soon the British established themselves in India and 1826 Muzaffarnagar became a revenue district of EAST INDIA COMPANY regime.

During the first struggle for freedom in 1857 a lot of action was in the District. Mohar Singh of Shamli and SAIYED-PATHANS of Thanabhawan fought against the British and captured the Tehsil of Shamli. But later on the British army showed its brutality and recaptured the area. A lot of freedom fighters were done to death by them and this attempt was failed. After that attempts the course of Indian National Movement changed and the Indian National Congress came to the fore. The educated elite took the path of peaceful constitutional methods. On the 6th of April, 1919 a office of Indian National Congers was opened in Muzaffarnagar under the leader ship of Dr.BABU RAM GARG, Mr.UGAR SEN and Mr. KESHAV GUPTA etc. The district became hot bed of freedom struggle and was frequented by national leaders like Pt. Madan Mohan Malviya, Mahatama Gandhi, Motilal Nehru, Sarojini Naidu, Jawahar Lal Nehru, Subhash Chandra Bose, Pt. G.B.Pant etc. Freedom struggle in Muzaffarnagar was guided by the national movement in India. A lot of police atrocities took place in the district. Many freedom fighters were put in the jail on fabricated charges; but they refused to be cowed down. On May-8 in 1940 SHUGAN CHANDRA MAZDOOR, CHANDER SEN and RAMJI LAL captured the district collector's chambers. The quit India movement of 1942 saw lots of activities in Muzaffarnagar also. Mr. HARDAM SINGH of Bhera Thru made the declaration of Independence. Lot of students of the district went to jails. But their enthusiasm was not weakened. by the police torture. Mr. KESHAV GUPTA"S RESIDENCE was the venue of the flag hoisting ceremony on the day of independence when India had "TRYST WITH DESTINY'.

Pt. SUNDER LAL, LALA HARDAYAL, SHANTI NARAYAN of Khatauli are some of the most famous names of intellectuals who were related to national movement. Apart from them there is an unending list of the persons who sacrificed their lives during the freedom struggle.

Liyakat Ali Khan the first prime Minister of PAKISTAN was from Muzaffarnagar. Thus we have tried to scan through the historical out lines of the district. From the period of HARRAPAN culture to present day Muzaffarnagar has been full of activities and always in the news.

It is mainly an industrial town with sugar, steel and paper being the major products. It boasts of the highest per capita income in the country and the highest in the state of Uttar Pradesh. The Jaggery (heated sugar cane juice) market in Muzaffarnagar is the largest in the world. Muzaffarnagar spent 600 crore on shoes and dress in 2006 (As per report national news paper Dainik Jagran)which again is the highest in India as compared to non metro cities.

Muzaffarnagar town Shamli paid highest LIC premium in India while Muzaffarnagar pays maximum telephonic revenue as a rent in India. The city is situated half way on the Delhi-Dehradun Highway.

The older parts of the city have a Mughal feel to them. Forty percent of the population is Muslim. There is a sizeable Sikh and small Christian population as well. Even though the majority remains Hindu.

The historical towns of Meerut, site of the rebellion of 1857, and Hastinapur are close by. Nearby towns are New Delhi, Dehra Dun, Saharanpur and Mussoorie.

The All India Jat Mahasabha was founded in Muzaffarnagar in western Uttar Pradesh, India in 1907. Its two founder members from Muzaffarnagar were:

Jat Khaps in Muzaffarnagar district by gotra and villages in them are[3]: 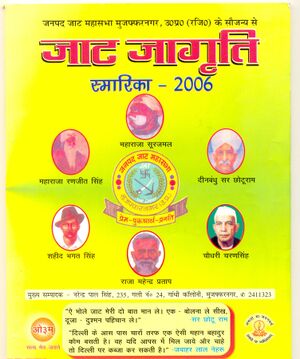 I thought to study the distribution pattern of Jat Gotras in the Muzaffarnagar district in Uttar Pradesh. There are no ready records or studies as such. So I took the life-membership list of Jat Jagriti Smarika - 2006, Published by Janpad Jat Mahasabha Muzaffarnagar. It gives details of life members’ names, addresses, place of origin, gotra and phone numbers of Jat families living in Muzaffarnagar city.

The two attributes Jat gotra and place of origin were brought on excel file, tabulated and shorted out. There is an interesting result which gives which jat gotra is from which village. This table is available with me and if any member is interested it can be uploaded. The following table is an abstract of the detailed table that gives population of each gotra as a number out of total jat families (263) in the directory arranged in alphabetical order.

The Jat Directory gives details of 263 Jat families who are life members. They are from 60 gotras. The figure after gotra is the count out of 263 from which we can roughly assess comparative population of that gotra in the district. Here is the list:

On the basis of above analysis the biggest Jat gotras of the district are as under in increasing dicated in bracket: