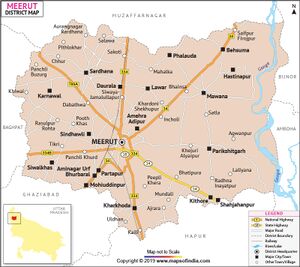 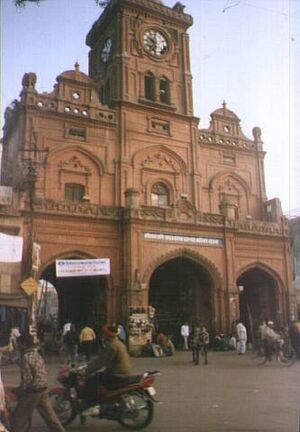 Meerut (मेरठ), (Urdu: میرٹھ) is a city, district headquarters and a municipal corporation in Meerut district in Uttar Pradesh.

It is an ancient city located 72 km (44 miles) north-east of New Delhi. Meerut also has one of the major Indian army garrisons/ cantonments in this part of the country.

Ravana's wife Mandodari (in Ramayana) hailed from Meerut. The town may have derived its name from "Maya Rashtra", the capital of the kingdom owned by Mandodari's father Mayasura. Maya (मया) gotra Jats are found in Madhya Pradesh. 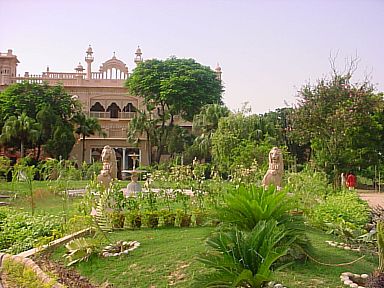 Meerut is famously associated with the Indian Revolution of 1857 against the British East India Company, when chants of popular Hindi slogan "Dilli Chalo" ("Let's march to Delhi!") were first raised here. Meerut cantonment is the place where the rebellion started when Hindu and Muslim soldiers were given rifle cartridges with a coating made of animal fat. The bullet wrapping was to be opened by mouth before use, which affected religious sensibilities of both Muslims and Hindus as the animal coating was alleged to be composed of pork and beef. Meerut leapt into international prominence during the revolution of 1857, when on 24 April, 1857, eighty-five troopers out of ninety of the third cavalry refused to touch the cartridges and after court martial, were sentenced to ten years imprisonment. This marked the beginning of a general movement of freedom from the British yoke, with the support of the civilian populace. Meerut is also famous in Indian history as one of the famous controversial case happened in India which is known as Meerut Conspiracy Case in the year 1929.

Sir H. M. Elliot Edited by John Dowson[1] writes quoting the Yamini which says that, in his Twelfth Expedition A.H. 409 (1018-1019 AD) after passing by the borders of Kashmir, that is, close under the sub-Himalayan range, and crossing the Jumna, Mahmud of Ghazni takes Baran, which is the ancient name of the present Bulandshahr for which more modern authors, not knowing what " Baran" was, substitute "Mirat" — then Kulchand's fort, which is the Mahaban of the other — then crossing the Jumna he takes Mathura — and then recrossing the Jumna, he proceeds to Kanauj, and takes that and its seven detached forts, of which the ruins of some may still be traced. He then goes to Munj, " a city of Brahmans."

First War of Independence 1857 began with a mutiny of sepoys of British East India Company's army on the 10th of May 1857, in the town of Meerut, and soon erupted into other mutinies and civilian rebellions largely in the upper Gangetic plain and central India, with the major hostilities confined to present-day Uttar Pradesh, Bihar, northern Madhya Pradesh, and the Delhi region. The rebellion posed a considerable threat to Company power in that region, and it was contained only with the fall of Gwalior on 20 June 1858. The rebellion is also known as India's First War of Independence, the Great Rebellion, the Indian Mutiny, the Revolt of 1857, and the Sepoy Mutiny.

At Meerut, a large military cantonment, 2,357 Indian sepoys and 2,038 British soldiers were stationed along with 12 British-manned guns. The station held one of the largest concentrations of British troops in India and this was later to be cited as evidence that the original rising was a spontaneous outbreak rather than a pre-planned plot.[2]

Although the state of unrest within the Bengal Army was well known, on 24 April Lieutenant Colonel George Carmichael-Smyth, the unsympathetic commanding officer of the 3rd Bengal Light Cavalry, ordered 90 of his men to parade and perform firing drills. All except five of the men on parade refused to accept their cartridges. On 9 May, the remaining 85 men were court martialled, and most were sentenced to 10 years' imprisonment with hard labour. Eleven comparatively young soldiers were given five years' imprisonment. The entire garrison was paraded and watched as the condemned men were stripped of their uniforms and placed in shackles. As they were marched off to jail, the condemned soldiers berated their comrades for failing to support them.

The next day was Sunday. Some Indian soldiers warned off-duty junior British officers that plans were afoot to release the imprisoned soldiers by force, but the senior officers to whom this was reported took no action. There was also unrest in the city of Meerut itself, with angry protests in the bazaar and some buildings being set on fire. In the evening, most British officers were preparing to attend church, while many of the British soldiers were off duty and had gone into canteens or into the bazaar in Meerut. The Indian troops, led by the 3rd Cavalry, broke into revolt. British junior officers who attempted to quell the first outbreaks were killed by the rebels. British officers' and civilians' quarters were attacked, and four civilian men, eight women and eight children were killed. Crowds in the bazaar attacked off-duty soldiers there. About 50 Indian civilians, some of them officers' servants who tried to defend or conceal their employers, were killed by the sepoys.[3] While the action of the sepoys in freeing their 85 imprisoned comrades appears to have been spontaneous, some civilian rioting in the city was reportedly encouraged by kotwal (local police commander) Dhan Singh Gurjar.[4]

Some sepoys (especially from the 11th Bengal Native Infantry) escorted trusted British officers and women and children to safety before joining the revolt.[5] Some officers and their families escaped to Rampur, where they found refuge with the Nawab.

The British historian Philip Mason notes that it was inevitable that most of the sepoys and sowars from Meerut should have made for Delhi on the night of 10 May. It was a strong walled city located only forty miles away, it was the ancient capital and present seat of the nominal Mughal Emperor and finally there were no British troops in garrison there in contrast to Meerut.[6]  No effort was made to pursue them.

Meerut has one of the largest Muslim populations among the major cities of India(close to 45%). There is also a significant Christian population. Meerut was the site of one of India's worst communal riots during the 1980's.