Note - Please click → Dadri for details of similarly named villages at other places. 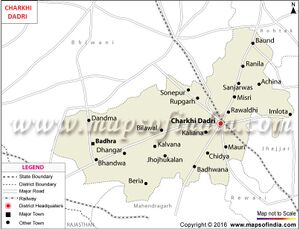 Charkhi Dadri (चरखी दादरी) is a city and district headquarters in Haryana, India. It was given the status of an independent district in 2017. Earlier, it was part of Bhiwani district.

Charkhi Dadri was founded by Dadraj Phogat in 1055 AD.

Dadri is tehsil/Taluka with 184 villages and is the largest tehsil in Haryana now. List of villages is :

It was founded by Dada Bilhan Singh Jat of Phogat gotra. Phogat name is derived from foorgath who were old kshatriya warriors of Jatsangh. Phogat Jats are also called Fageria in Rajasthan today. Dadri was founded by Raja Bilhan Singh younger son of Maharaja Prithvi Raj Chauhan according to some history books.

Dadri phogat ki - jhadu sardar was the order of the day by Maharaja Jaswant Singh. Jhadu Singh Sardar was ruler during Akbar's time. Maharaja Jind was married in the same family

Charkhi Dadri is known as local educational Hub. It has various degree and professional colleges and schools. DRK Adarsh Vidya Mandir school is one the oldest and famous school. Same way Janata College is very old and famous. Credit for upliftment of education in region goes to mr Ram Kishan Gupta - ex MP who made a society named "Dadri Education Society" and opened many educational intitutions.

lated.* Nineteen villages, adjoining his new estate of Dadri, were assigned to him on payment of a Nazarana of Rs. 4,20,000, and for these a separate Sanad was granted.†

Exchange of Dadri villages for others in Hissar

Lepel H. Griffin [2] writes that - When the Dadri district was made over to the Raja of Jhind, the villages were overlooked which were not at the time of its confiscation under the direct control of the Nawab. From his not being able to manage them, as well as from many of them having been mixed up with Rohtak villages, their administration, in Police and Revenue matters, had been conducted by the British authorities, while the revenue was family by your adoption of an heir from the Phoolkean house will be in accordance with the wishes of the paramount power, and will be gladly recogized and confirmed ; and that if at any time any Raja of Jhind should die without male issue, and without adopting a successor, it will be open to the Maharajah of Pattiala and the Rajah of Nabha, in concert with the Commissioner or Political Agent of the British Government, to select a successor from among the Phoolkean family ; but in that case a Nuzzuranah or fine, equal to one-third of the gross annual revenue of the Jheend State, shall be paid to the British Government.

Be assured that nothing shall disturb the engagement thus made to you, so long as your House is loyal to the Crown and faithful to the conditions of the treaties, grants or engagements which record its obligation to the British Government

† Translation of a sanad on grant of portion of the purgana of Boodwanah District Jhujjar, bestowed on the Rajah of Jheend by His Excellency Earl Canning, G, C. B., Viceroy and Governor General of India.

Whereas the devotion and loyalty of the Rajah of Jheend and of his ancestors have always been conspicuous since the establishment of British supremacy in India, His Excellency, the Viceroy and Governor General being desirous of marking his high appreciation of these qualities, has been pleased to bestow upon the Raja portions of Purgunnah Boodwanah, of the district of Jhajjar, containing nineteen villages, according to vernacular list annexed, assessed at a yearly revenue of (Eighteen thousand five hundred and twenty Rupees ) 18,520 Rupees, and to accept from the Rajah a " Nuzznranah “ of ( Rupees 3,70,004, ) three lakhs seventy thousand and four. It is accordingly ordained as follows :—

Article 1.— The territory above mentioned is conferred upon the Rajah of Jheend and his heirs for ever.

paid to the Nawab. The Raja requested that these villages might be made over to him or villages of equal value elsewhere. The Government held that although the Raja had obtained land of the full estimated value, yet that it was intended that the Dadri territory should be made over to him in its integrity, without any exact calculation of the value; and that the villages in question had consequently formed part of the grant. But considerations of convenience with reference to District administrative arrangements, made it advisable to give the Raja villages of equal value in Hissar, and this was accordingly arranged to his complete satisfaction.* The only question of importance regarding the new territory made over to the Cis-Satlej Chiefs, had reference to their right to resume rent-free grants, or Mafias at their pleasure. The question was first raised by the attachment of the jagir of one Hakim Kasim Ali Khan of Jhajjar, situated in the pargannah of Dadri. The Raja of Jhind considered this man a rebel, but several high officials of Government thought this opinion mistaken, and that the Hakim was deserving of protection for services which he had rendered. He owned

Article 2.— The Rajah and his successors will exercise the same rights, privileges, and prerogatives in this newly acquired territory as he at present enjoys in his ancestral possessions, according to the terms of the Sanad, dated 5th May 1860, and signed by his Excellency Earl Canning, Viceroy and Governor General of India.

Article 3.— The Rajah and his successors will continue to maintain the same loyal relations with the British Government, and to fulfill the same obligations with regard to this newly acquired territory, as were imposed on him by the terms of the Sunud, dated 5th May 1860, relating to the Rajahs ancestral possessions.

Letter of the Viceroy to the Rajah, dated 5th January 1861 .

eleven villages, which were asserted to have been in possession of his family for five generations, long anterior to the advent of the Muhanunadan Chiefs now dispossessed by the Sikhs. 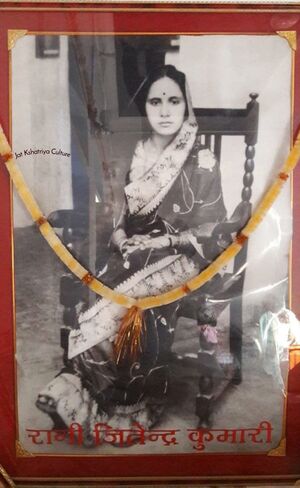 Dada Bilhan Singh came to Dadri area in 1384 AD (vikram samwat 1441). He was from Phogat clan of Sanjarwas village and married in a Rajput family of nearby Sanwad village. Rani Samakaur daughter of Chaudhary Jawaharsingh was married to Maharaja Jind.

Dadri was a lake called Dadar. One day Dada Bilhansingh came to this area and saw a cow and lion drinking water side by side. One Mahatma Swami Dayal was also there in his Ashram. Bilhansingh asked for Mahatma's blessings and advice. Mahatma advised him to Make this place his home and blessed that his family will rule this place in future. According to a legend he took oath under a Fog or Fig tree and he was called Phogat from that day.

The famous lake Talab Shyamesar and Dayal temple are still there today.

Dadri was also a district (pargana) and state (riyasat) in the past. Tehsil Dadri in earlier decades were known as Dalmiya-Dadri. Seth Dalmiya established the Cement Factory which later became CCI.

Former Chief Minister of Haryana, Master Hukum Singh Phogat, belongs to this place. He happens to be a trade unionist and was elected as MLA Haryana. Ex-MP Ram Krishan Gupta, was a freedom fighter, politician, educationist and social worker.

This small town was the cynosure in the world when it witnessed an air collision of two planes in 1996.People of country remember this incident and that is how Charkhi Dadri comes in their deleberations. [3]