Dabas (डबास)[1]/Davas [2](डवास)[3] Dabas (दबास)[4] is a Gotra of Jats found in Delhi, Rajasthan, Uttar Pradesh and Haryana. It is branch of Chauhan.Dilip Singh Ahlawat has mentioned it as one of the ruling Jat clans in Central Asia. [5] They were supporters of Chauhan Confederacy.

Ram Swarup Joon[8] writes about Dabas: They have 16 villages in Delhi, in the neighborhood of Dahiya Jats and have intimate relations with the latter. They are not descendants of Dahiya Jats but came along with them from Rajasthan.

According to puranic legend Dabas are the descendants of Maharishi Dadhichi the great king of Sindh in Vedic period. He had four sons namely Dahiya, Davyas (Dabas), Kundu and Hooda. Dadhichi an emperor turned Maharishi died at the age of 100 years while fighting to non-Aryan tribes. In the battle his four sons fought with utmost bravery and annihilated the non-Aryans.

The epic makers goes on to prove that the families of Dahiya, Dabas, Kundu and Hooda lived together up to the times of Mahabharata in the shape of groups like Soorsaini, Vrishni and Bhoja. They lived in Ujjain, Avantika, Sambal, Indraprastha, Rajasthan and other Northern India parts up to 7th Century AD. 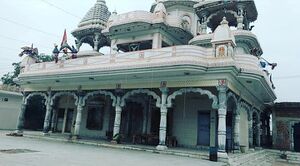 An old famous temple of Dada Ghantal dev is in ancient Jat village of Dabas clan called Rani Khera ,which was named after a Tomar Jat Princess , who was married with a Dabas Jat king , the tomar princess came from Mehrauli to her new matrimonial home with Dabas soldiers. From here dabas clan grew into the largest Jatland Baron clan of Delhi.

Dada Ghantal Dev an apostle for Dabas and worshipped as gram deity. A learned and deity among gram deities is also the spiritual head of this Community. He lay to rest on the same place where present Mandir exists. Mandir was built at his Samadhi. Every year men and women from far and near places come to pay homage and to seek blessings for better life and peace from Dada Ghantal Dev in the month of Baishakh on the 9th day of Moon, which also happens to be the birthday of Sita a Character in Ramayana.