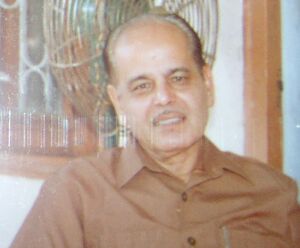 Bhim Singh Dahiya (1940 - 2000) (Hindi: भीम सिंह दहिया) was a historian and Civil Servant belonging to the Indian Revenue Service (IRS). He was born at village Sehri–Khanda, District Sonipat in Haryana, on March 19, 1940 (though official records put his birth date as 29th of September, 1940).

Bhim Singh Dahiya did his B.Sc. from Panjab University [1] and an M.A. from Delhi University. He was selected for Indian Revenue Service in 1963, having taken the IAS (Indian Administrative Service) examination with English and history as his chosen areas. He had great admiration for the works of William Shakespeare, loved to read historical studies with a particular interest in Indo-European cultures and languages and excelled at playing cards. He retired from Govt. service as Chief Commissioner of Income tax in 1998.

In 1982, he wrote the monumental book- Jats the Ancient Rulers (A clan study), published by Dahinam Publishers, Sonipat, Haryana. This book is a reconstruction of the History of Jats from time immemorial. His linkages of the clan names/ Gotras to the existence of the Jats in Central Asia, and Europe, put a stamp on the histography of the Jat History, for the people who could not have access to the works in Hindi or Urdu.

Bhim Singh Dahiya brought out to the knowledge of layman reader that Chandragupta Maurya, the Kushans, the second Guptas, and Harshavardhana were Jats. He showed by applying Grimm's Law, how the G letter was a substitution for the J sound, as the J letter did not exist in the ancient Greek alphabet. The significance was in determining who the Guti were, whom the Chinese and Western and most Indian Historians know as the ‘Yuezhi’, but are Jats, of whom Kushans were just one clan, not a people unto themselves.

Aryan Tribes and the Rig Veda

In 1992, he brought out his next book- Aryan Tribes and the Rig Veda, published by Dahinam Publishers, Sonipat, Haryana. Here he demonstrated how over 80 Jat Goths, Gotras, clans could be traced back to the Rig Veda. The Rig Veda is treated as a historical record of deeds and memories of the Indo-European tribes in India, rather than considering it merely a religious prayer book as was generally assumed earlier.

His third great work in the history is in the form of Book- History of Hindustan Vol. I, II, III. Dahinam Publishers, Sonipat, Haryana also published it. 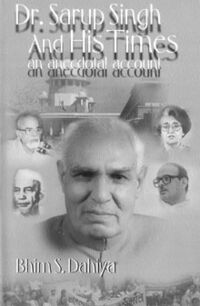 Dr. Bhim Singh Dahiya’s 152-page fast-moving biography of Singh titled - Dr. Sarup Singh and His Times an anecdotal account brings to the fore admirably his roles as son, husband, father, teacher, administrator, politician, statesman, and scholar. The book is a carefully researched depiction of a man whose humanitarianism and generosity manifested themselves in every position that he occupied. Himself a former vice-chancellor of Kurukshetra University, an MLA in the Haryana Assembly, and now the first incumbent to the newly created Dr Sarup Singh Chair at the same university, the author’s career bears a striking resemblance to that of his subject. Interestingly both are from Rohtak district, and both earned Ph.Ds in English Studies from abroad; Dr Sarup Singh from the University of London on 18th-century English drama, and Professor Dahiya from the University of Cincinnatti on Ernest Hemingway.

Papers published by him

He published a paper entitled The Mauryas: Their Identity (Vishveshvaranand Indological Journal, Vol. 17 (1979), p.112-133) in 1979 wherein he concluded that the Mauryas were the Muras or rather Mors and were Jat of Scythian or Indo-Scythian origin. It is claimed that the Jats still have Maur or Maud as one of their clan name. Consequently Ashoka, Chandragupta and all other emperors of Maurya dynasty were Scythian Jats. The Jat immigrants are close kin of the ancient Gutians of Sumer and the Goths or Gots known in Latin as Getae.[1]

Back to Jat Historians/The Authors