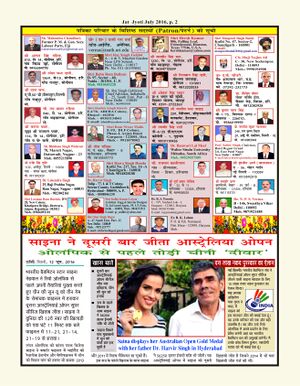 The flag bearer monthly magazine ‘Jat Jyoti’ has been promoting the mission undertaken for the welfare of Jat Community for the last 16½ years. This magazine carries news and articles about the success stories of high achievers and Jat Luminaries in varied fields such as sports, business, education, modern farming, top level bureaucrats, army and police officers and brilliant students of Jat Community for the last 16½ years. 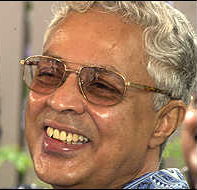 It also carries well-researched articles on ancient and modern history of Jats and highlights the contributions of Jat Community in all walks of life. It has a circulation and membership through out the world.

Its Patrons include among others, Former Prime Minister of Fiji Mr. Mahendra Pal Chaudhary.

Need of a Jat Habitat Centre in Delhi 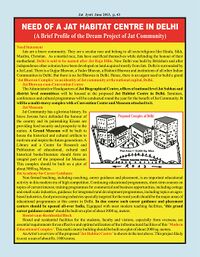 Need of a Jat Habitat Centre in Delhi 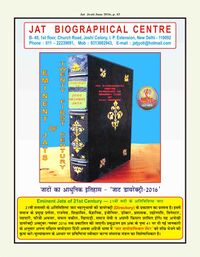 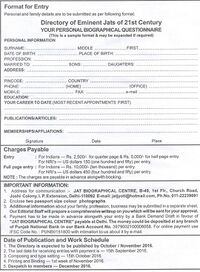 Invitation to become a part of modern Jat History: Enroll for who's who Directory of Eminent Jats of 21st Century

Why a Jat Directory?

Jats are a brave community with great traditions of social welfare through its Khaps and Panchayats. The community full of talent, patriotic soldiers and hardworking farmers. In this age of scientific enlightenment Jats have excelled in every field of activity. Be it education, administration, business, Jats are coming out as leaders and torch bearers. Overseas our brothers and sisters have excelled in technical skills, education, realty and politics. We are proud to have Asia's No. one builder and the richest person in Delhi is from among us. Another young star 'India Bulls' is creating history in the 'share market and realty'. There are thousands and lakhs of eminent persons who have excelled in their respective fields. A record of their achievements in the form of 'who's who - a Directory', will be a ready-reckoner and a great source of inspiration for others. Hence, there is an urgent need for such a useful publication. Come on join this great mission to educate and enlighten others from your experience and career graph.

World Class Publication: The proposed Directory will be an impressive hardbound book. Each page will have about 4 - 5 biographees with individual photographs generally as per typical sample/entry given below. A limited number of illustrious personalities may be given full page each.

As shown on back color page of this issue, it will a hard bound colorful directory biographies of about 2000 Eminent Jats will make this directory a grand publication of Jat community. A sample entry in the directory is given below.

SAMPLE ENTRY IN THE DIRECTORY:

Sample Entry in the Directory

Who may get listed?: Professionals with over 20 years experience like college teachers, scientists, technologists, engineers, doctors, administrators, fauzi officers starting with rank of Colonel, advocates of repute, social workers, political leaders, businessmen and progressive farmers are candidates for this unique publication.

One-day Annual Convention ‘International Jat Intellectuals Meet – 2017’ held at Delhi on 18th March 2017 was a grand success. Intellectuals of multi-faith brave Jat community from India and abroad deliberated on important social issues including a need of a strong Jat Organization like ‘Federation of Jat Institutions’ and ‘Jat Habitat Centre’ at New Delhi.

There were Two Technical Sessions, one before the Lunch Break and one after Lunch wherein over two dozen intellectuals from India and abroad deliberated on different social issues. Everybody appreciated the social mission of Prof. Jagdish Kumar Gehlawat and his dedication for community welfare through regular publication of highly informative and educative monthly ‘Jat Jyoti’ magazine.

‘Jat Habitat Centre / Jat Bhawan Complex’ at Delhi was considered to be need of the hour. It was felt that Jat Sabhas, Khap Panchayats and other Jat Associations from India and abroad should come together to fulfill the above mentioned social needs.

During the day-long program a team from Online Media Channel named ‘India Fire News’ interviewed Prof. Raghuvir Singh Verma from Canada and Prof. Jagdish Kumar Gehlawat, President, Jat Biographical Centre, about social mission of ‘Jat Biographical Centre’ and the ongoing program. They were requested to highlight the Theme of the day’s proceedings.

The link of program covered by ‘India Fire News’ is given below: https://youtu.be/f33i8PngufA

Back to Jat Magazines