Note - Please click → Mohammadpur for details of similarly named villages at other places. 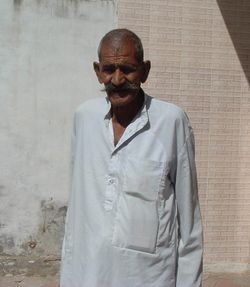 Mohammadpur Mazra (M.P Mazra) (मोहम्मदपुर माजरा) village is situated near Jahajgarh village which is located on Jhajjar-Dadri road, in Jhajjar district. Though the village is a medium-sized one, it has huge forest area and agricultural land, its lands touching large neighbouring villages like Doobaldhan, Beri, Chhuchhakwas, Dhaud and Gwalison.

The annual cattle fair held near Diwali every year, is believed to the the largest such fair in India. It is called 'Jahazgarh Pashu Mela' - held on a large tract of land between this village and the nearby Jahazgarh village. This site has a large swimming pool built in the British times. This is used mainly for swimming competition during the cattle fair. The villager's worship DADA SMADHYA WALE who knowns as senior person or guru of the village.

Jat Gotra in the village

Jat gotra in this village is Dabas.

There is one more village of the same name (Mohammadpur Mazra or M.P. Mazra) in Jhajjar district itself. It is a tiny village and hence, less known. This is located near Badli, on the main road (Badli-Jhajjar). Like neighbouring Badli village, it is also a Gulia gotra village.