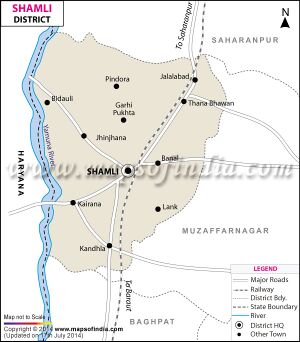 Shamli (शामली) is a city, and the district headquarters[1] in the Indian state of Uttar Pradesh. Shamli was declared as a district in September 2011 and was named Prabudh Nagar by Mayawati who was CM of UP at that time, but in July 2012 Shamli returned to got its old name by Akhilesh Yadav who became CM of UP in 2012.

It is located on the Delhi–Saharanpur highway. It is around 100 km from Delhi, 38 km from Panipat and 65 km from Saharanpur. Shamli is known for its old sugar mill called Upper Doab Sugar Mill, and serves as a market town for surrounding villages.

During the first War for freedom in 1857 a lot of action was enacted in the District. Chaudhary Mohar Singh of Shamli and SAIYED-PATHANS of Thanabhawan fought against the British and captured the Tehsil of Shamli. But, later on, the British army showed its brutality and recaptured the area. Many freedom fighters were done to death by them and this attempt was failed.

The Jats are socially, economically and Politically the most dominant and influential people in and around Shamli. According to The Imperial Gazetteer of India, 1901, 'The origin of the Jats has been constantly discussed, and in this connection we may quote the words of Mr. Miller, the Settlement Officer: " Much ingenuity has been spent on the attempt to prove them to be Scythians; but, if physiognomy counts for anything, no one could doubt their Aryan origin. Their tribes or subcastes are extremely numerous; 650 have been taken account of in the census returns in this district alone. With scarcely any exception, all the tribes state that they migrated to this district from the Panjab, Jhind, Hariana, Sirsa, Rohtak, and the places in which they locate their original home.

The great tribe of the Ghatwalas however, who hold a chaurasi of villages in the west of the district and in Meerut, invariably say that they come from Ghajni or Garh-Gajni, and it is generally supposed that the Afghan Ghazni is alluded to. The other most important clan here is the Balian with headquarters at Sisauli and Purbalian.

The Saliklan, a powerful body, further south, have some representatives in this district.

The Jats entered the district from the south-west and established themselves in its most fertile tracts. Avoiding the wastes and jungles near the Jumna, they took almost exclusive possession of the rich tract lying between Shamli and the southern border; then crossing the Hindan they occupied the southern portion of pargana Baghra and the best estates of Shikarpur; but the force of the immigration had spent itself by this time, and across the Kali, though Jats are still numerous, their communities are scattered amongst villages belonging to cultivators of other classes." The parent village of the Ghatwalas is Lisarh. Shamli is another large Jat centre, while the Jats between Shamli and the southern border hold what is known as a " bioni " or group of fifty-two villages. The large Jat settlement in the north of the district lying between the Gujars and Chauhans of Chausiana on the west and the Pundirs of Muzaffarnagar on the east is composed of various tribes which have gradually coalesced. There are also any jat occupying the upland ridge above the Ganges khadir. Most of the Jats in this district are known as Deswalas, who were the first of their clan to obtain a footing in these provinces. The Jats are undoubtedly the best cultivators in the district, and to them are due the credit of introducing the present system of agriculture. They are very hard workers, their toil continuing all the year round; there is scarcely any season in which some crop does not call for attention. In. character they are somewhat narrow-minded, and their self-reliance tends to exclusiveness and a spirit of excessive independence. Further, there is a great want of cohesion among the Jat communities, and they are rapidly being broken up into very small fragments by partitions. At the same time their superiority is manifested by the fact that the Jat villages can pay with ease revenues which would undoubtedly cause a break-down if the lands were held by other castes, while at the same time they maintain an equally high standard of comfort.'

Udyoga Parva/Mahabharata Book V Chapter 82 mentions that Krishna departed for Hastinapura on Yudhishthira's mission. He came upon a delightful forest called Shalibhavana (शालिभवन) (V.82.15) which was filled with every kind of crops, a spot that was delicious and sacred. Many of the citizens of Upaplavya, coming out of their town, stood together on the way, desirous of beholding Krishna. At last stays Krishna at Vrikasthala for night-halt. [2]

Shamli is located at 29.45|N|77.32|E|[3]. It has an average elevation of 248 metres . The small city lies on the roads linking some major cities in this area, such as Delhi, Meerut,Karnal,Panipat Baghpat , Baraut and Saharanpur. The area lies to the east of the Yamuna river flowing through Karnal. The area has a very fertile land called 'Doab' meaning "a place lying in the deltas of two rivers", i.e. The Ganga and The Yamuna . The area is a major center of sugar cultivation and hence an area which attracts the sugar industries. This town is home to Hindus,Muslims,Sikhs Christians,Jain people.

Shamli used to be a small town but now it is expanding very fast and the latest Mayawati government has unveiled plans of declaring it a district. Shamli is 30 kms from Muzaffarnagar and 100 kms from Delhi. This small town has an interesting feature that despite its small size, it has 10 movie halls. People are very fond of watching movies. This small town also has a sugar mill which is the source of prosperity of the people of nearby areas.

Back to Mahabharata Places/Jat Villages