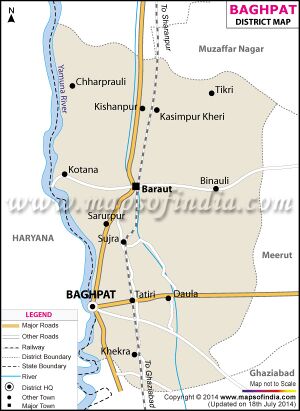 Location of Baraut in Baghpat District

Baraut (बड़ौत) is a city and tahsil in Baghpat district in the state of Uttar Pradesh, India. Earlier it was under Meerut District which was bifurcated into Meerut and Baghpat districts.

This small town is mostly inhabited by traders and farmers, most of the population consists of Jats, Muslims, Jains with Sikhs and christians being the minority.

Baraut is a multi-religious place with many Hindu Temples, Jain Temples and Mosques around. There are 32 Temples, 45 Mosques, 2 Gurudwaras and 2 churches around this region. One of the biggest temple in this area is known as Digamber Jain Bara Mandir. It is very famous and holds big importance here. It is worth seeing and cannot be described in words.

On the day of Mahavir Jayanti (Birth of Bhagwan Mahavir) during month of April a three-day carnival is organised every year.

Another big Hindu temple in the heart of the city is Panchvati Temple, on the bank of nahar (stream of water). This temple has three parts, first with Goddess Santoshi Ma temple, second is Ram Temple and third part is Ganesh and Hanuman ji temple.

Baraut city is also the major centre of education . Digambar Jain College, started by the Gangaram Kishorilal Jain family and Janta Vedic college,started by Mahashaya Chaudhary Umrao Singh are famous. Master Umarao Singh was the founder teacher. In Baraut city all the courses are available up to the research level especially in the field of agriculture. The Janta(Jat) Vedic College is famous for its quality education in the field of agriculture. The newest institute DIET [District Institute for Education and Training] is set up by the education deptt. of UP in Baraut city at Barka road. Jain Polytechnic is famous for technical education.

Jat College:Janta Vedic College, Baraut (Baghpat), was established long time back in 1917. The entire credit goes to the then poor peasantry of the region who having deep faith in Arya Samaj, formed a society and go it registered in 1920 under Society Registration Act in the name of Jat Shiksha Sabha and started Jat Vedic High School which rose to undergraduate and postgraduate level in 1949 and 1956 respectively. It was affiliated to Chaudhary Charan Singh University (formerly Meerut University), Meerut, and was also included under section 2(f) and 12(b) of UGC Act.

Since its inception, the college developed into a multi-faculty co-educational college having more than 5,000 students, imparting quality education in the faculties of Arts, Science, Agriculture, and Education. Each department is well equipped with all the necessary modern teaching aids as well as excellent laboratories with computers (wherever needed) which are put to their optimum use by highly qualified faculty members.

Sprawling campus situated on a tributary of yamuna canal spread over more than 40 acres (160,000 m2) of land surrounded by high raised brick walls and railings, having well-developed lawns of more than 10 acres (40,000 m2). Concrete roads parked with big rare trees connecting different roads give it a unique picture-sque and elegant look of a beautiful university.

The town gets a flow of people from the surrounding villages right from morning for their buying and selling needs. Villages have agriculture as their mainstay. Area is fertile being close to the river Yamuna/Jamuna. Main crops appear to be wheat, sugarcane and mustard. In fruits mangoes and guavas are grown. Grapes too but not so sweet. Watermelons, muskmelons and 'kakri' make their appearance during summers. Rim and dhura and agricultural implements are the small scale industries and few sugar mills and khandsari units abound.

Baraut is also a village in Kurukshetra district of Haryana, under Thanesar Tehsil.